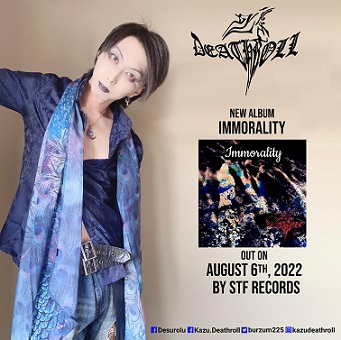 In 2015, Deathroll released his third album 破壊(pronounced “hakai”) from METAL JAPAN RECORDS. After he released his fourth album Z.K.K. on 1st April 2017, he signed with Glob Metal promotion based in Russia on 1st August 2019. His most recent album A SICK LIFE was released on 6 September 2019 with STF Records based in Germany to all around the world.

On 6th of August 2022, they will release their new album titled "Immorality" by STF Records.

The song “Don't understand the principle of the thing" is included in this album.