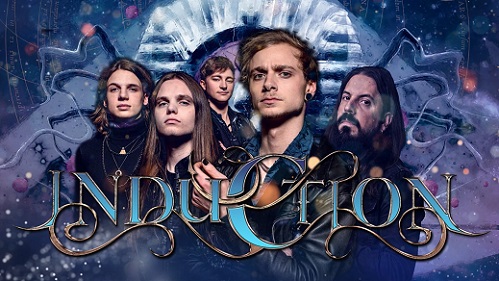 Progressive power metal highflyers Induction return with a new lyric video for their latest single 'Sacrifice'. With several new singles at the horizon in the upcoming months a fully recorded sophomore album (due to be released in fall this year), and a freshly signed deal with the booking agency 9Lives, the quintet is gearing up for several upcoming surprises. Right in time for the video release, Induction also launch a new ‘Sacrifice’ t-shirt design that you can get here: https://www.atomicfire-records.com/product/46369/sacrifice

Originally founded in 2014, Induction left their first mark with first single 'The Outwitted Consecration' (2016) before completely entering the metal world by releasing their self-titled debut album in 2019. Its enormously positive reception even paved them the way to touring across Europe alongside Brazilian power metallers Armored Dawn in November of the same year. It was a notable career start for the quintet that was unfortunately haulted by the still ongoing pandemic leading to a break (at least on live front) that wasn't only used by the band to work on their sophomore album but also to renew their power - and they can't wait to unleash it in 2022.