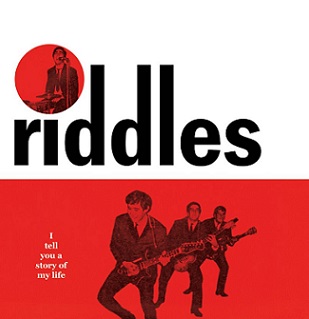 B-otherSide Records is going to publish previously unreleased music of Riddles, a Greek garage band from the '60s. Right below you can read all the details.

B-otherSide records proudly presents the previously unreleased album of the greek garage band of the 60s, Riddles, recorded at two different sessions on 1966. Riddles were a famous Piraeus band, well known for their ability to cover the Beatles' repertoire as long as the garage rock sounds of the 60s era. After a magnificent live performance at the 1966 Battle of the Bands contest, they won the first prize and the contract to record their own first songs. In June 1966 they entered Echo Studio and under George Fren's sound engineering, they recorded four songs, two of which were released in a 45 rpm single. These two songs along with the other two recorded songs plus a rehearsal at Studio Echo with five more tracks, in total nine tracks, are now released in 300 hand numbered vinyls, from which the first 150 in red color and the rest 150 in classic black color vinyl. The release contains a six-page insert with the band's biography, credits, english translation and unreleased band photos. The audio mastering was made by Yiannis Kyris and the sleeve and innersleeve design by Thanassis Xanthakos (Plan 59), under the advices of Riddles' founder member Yiannis Renieris and Victoria Renieri.