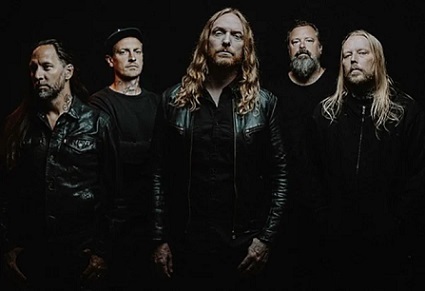 Halo effect is the tendency for positive impressions of a person, company, brand or product in one area to positively influence one's opinion or feelings in other areas, according to Wikipedia. However, The Halo Effect is the name of the new group, launcehd by former In Flames members!

Jesper Strömblad (guitar), Daniel Svensson (drums), Peter Iwers (bass), Niclas Engelin (guitar) and Mikael Stanne (vocals) have launched a new project. So far, only a promotional photo of the new outfit has been released, with the promise of more information to follow soon.

Jesper Strömblad quit In Flames in February 2010 in order to continue receiving treatment for his alcohol addiction. Daniel Svensson, who joined In Flames in 1998, announced in 2015 that he was leaving the group to focus on his family life. A member of In Flames since 1997, Peter Iwers issued a statement in November 2016 saying that he was exiting the band "to pursue other endeavors". Niclas Engelin has been sitting out In Flames' tour dates for the past two and a half years but has never officially confirmed his departure from the band. Mikael Stanne (Dark Tranquillity) sang on In Flames' debut album, 1994's "Lunar Strain".

The Halo Effect will release its debut single, "Shadowminds", on November 9th, 2021.