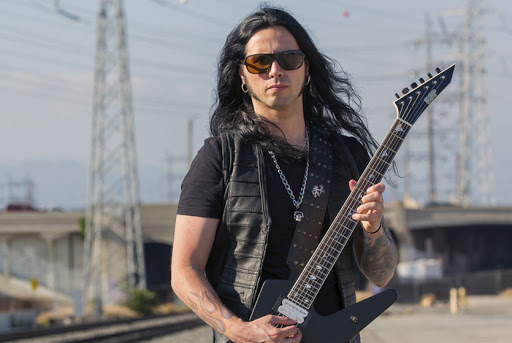 Gus G, the famous guitarist (solo, Firewind, ex -Ozzy Osbourne), is releasing a new single ("Fierce") and goes black metal in the teaser of the single's video! The single/video will be released on Thursday, June 10. In the teaser Gus G sports a black metal-style corpsepaint, while playing the guitar and sitting behind the drum kit.

Earlier this month, in a video message, Gus G described the follow-up to the "Exosphere" single saying that "it is a real metal track. If you guys like my past instrumentals or stuff that Firewind has done, the fast stuff, you're gonna like this. It's a fast song. There's a lot of shredding. And a really funny video. So I can't wait for you to check it out. I'm not gonna say any more. But, yeah, it'll be out in a few days, and you'll see and hopefully you can tell me what you think". Gus G promised also that more singles will come out over the next few months. "We're planning to release them in different phases, and then I think sometime around this fall, we're gonna drop the whole album", he said, "I guess it's a new way of doing things — kind of like teasing the album with singles first and seeing how they perform and what people think and let people get used to it".

Finally, we must mention that the Greek guitar hero has his new, first all-instrumental solo album ready. Dennis Ward mixed and mastered the album, apart from playing the bass. Drums were performed by [Jan-]Vincent Velazco.