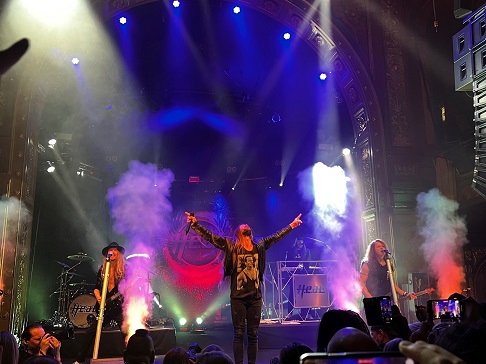 Covid-19 has not departed yet for good. Fortunately, we are able and have actually begun to go on live gigs for some time, which is something we have all been waiting for a long time, almost two years! Nestor and H.E.A.T were two bands that I have recently discovered, especially Nestor, which have proved to be a revelation for me. Therefore, when this gig was announced and saw it on the social media, I went ahead to buy the ticket straight away and counted the days impatiently. Saturday is the perfect day within the week to attend a live gig. I started the evening around 6 pm, where I met one of my colleagues at Berns, we had already booked a table for dinner, since this is a well-known restaurant (not my favorite type of food, I admit...) in Stockholm and how convenient: they host gigs too! So, around 7:45 pm, I and my colleague Tomas headed next door (not big distance as you can imagine) for the main event. A lot of people had already started queuing outside on a strange day regarding the weather (first snow, then rain, then sun and then clouds, it’s called ‘april vädret’ in Swedish and it basically means that you can have all types of weather within the same day or even hours). Anyway, we entered the venue, a really impressive one, high ceiling, with classic-vintage decorations, giving it a classical feeling, not the average rock venue to attend! The gig was sold out, there were people outside, while we were waiting, who were asking if someone had an extra ticket, so we were the lucky ones I guess! You could also see people from all different ages, from 18-20 years old to 55-60 years old, old and new rockers who love listening to melodic hard rock/AOR. 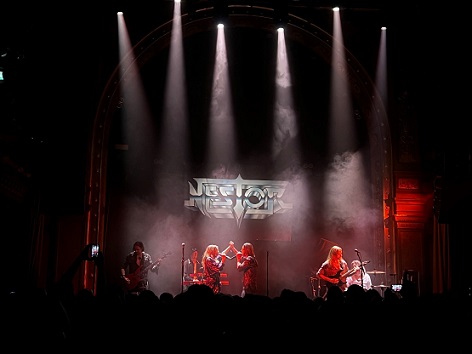 Nestor started on an emphatic way around 8:15 pm. Their sound is so gloriously ‘80s! These guys sound amazing on stage! I really like their album ‘Kids in a Ghost Town’, it’s a trip back to 1987, 1988, or maybe 1989, their song with the same title (‘1989’) is their highlight, if you ask me, and that was probably their best performed that night. Guitars, keyboards, vocals, drums, band performance, clothes, sunglasses(!), all send you back to the glory years of the ‘80s, where AOR/melodic hard rock was top of the tops! Overall their sound was awesome, except some issues with the intensity of the singer’s microphone, which I believe could have been a little bit better. They played with so much energy, communicating with the audience and performing (almost) all their album, which has so many hits. A fantastic performance!

Following a break of 15 mins approximately, H.E.A.T came on stage, and actually, when the lights came down, before the band enters the stage, the intro song was ‘The Heat Is On’ by Glenn Frey, back from 1984 (on the ‘Beverly Hills Cop’ soundtrack). How cool! Then, and for the rest of the night, the band played, we experienced an explosion of energy, party mood and hard rock to the maximum! Now that Kenny is back with the band, it seems like a missing piece was left to get the band back on track. The playlist included all their classics and more. No one from their fan base would have been disappointed at all - ‘Rock your Body’, ‘Emergency’, ‘1000 Miles’, ‘Living on the Run’, ‘Back to the Rhythm’, ‘A Shot at Redemption’, ‘There for You’, ‘Late Night Lady’. All their true classics were there. Of course, there is always room for one, two or three more songs, but overall I would not be unfair to them, the playlist was ‘full throttle’ for the perfect party! This band is pure delight to see them performing live, all of us almost jumping in many of the songs and having a great time. Special credits, apart from Kenny of course, go to the drummer Don Crash and the guitarist Dave Dalone for their extra energy, their extra passion on stage and for both the guitar and the drum solos, both highlights!

A fantastic night in Stockholm with two amazing and promising bands for even better things to come in the future. Can’t wait!