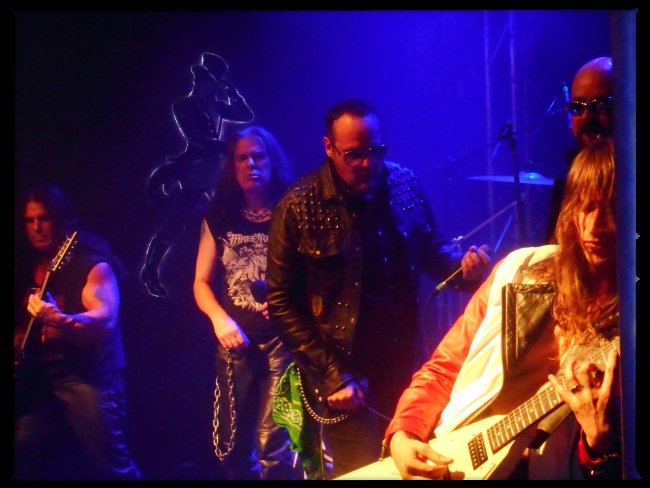 When I heard about the collaboration of Tim “Ripper” Owens (ex-Judas Priest, Iced Earth etc.), Harry Conklin (Jag Panzer) and Sean Peck (The Cage etc.), I was excited. And imagine how amazed I was, when I was informed that the trio would visit Athens for a live show! Although I hadn’t listened to the Three Tremors album, I was sure that the live show would be incredible. The Three Tremors visited Athens on September 28th, 2018, a date when their debut album hadn’t been released and that was a disadvantage for the show, since, firstly, the audience wasn’t familiar with the band’s songs, and secondly, that fact affected the attendance of the public. Nevertheless, we were there to enjoy three of the most skilled vocalists in the heavy metal scene – and there is no need for an introduction of Owens, Conklin and Peck, who have showcased their quality with their past and present bands. The band that opened the whole event was Murder Angels from Larissa, Greece. The Greeks are playing in a speed/thrash metal style and managed to warm the fans, who had already come to the venue. They performed with might and conviction, their songs sounded good, their stage appearance was interesting and they won the applause of the fans. It was the first time I listened to Murder Angel’s music and I am now looking forward to their next album release. It’s obvious that the guys have talent! Murder Angels left the stage and the fans were eagerly waiting for The Three Tremors. The three vocal masters were punctual to their rendezvous with the Greek audience. Indeed approximately at 21:00 o’clock the three vocalists and their backing band entered the stage furiously and began singing without mercy! It was a blast to listen to the three of them singing with their exceptional voice, we were all impressed and excited. But there are some facts that should be mentioned. First of all, their voice couldn’t be heard with clarity and the sound engineer failed to combine the three microphones. There were obviously sound problems and that’s a big disadvantage – we could hardly hear Sean Peck’s voice! What is more, the whole gig seemed like a screaming contest! Of course, Owens/Conklin/Peck can reach amazing high notes, but they overdid it. So, I can say that from a certain point I was tired of these high-pitched vocals!  In addition to this, I didn’t like the way the three voices were combined. We all know that it isn’t easy to organize three voices (and three egos), however, there could be a combination of a lead voice and backing vocals – instead of that, you could hear three lead voices and no backing vocals. What a mess! Despite these, it was a nice live show that satisfied the fans, a great, singular moment for every metalhead that came that night at Kittaro. Come on, Owens/Conklin/Peck were there in front of us, singing like there is no tomorrow! The Three Tremors sang almost all their debut album songs plus: Judas Priest’s “Burn in Hell”, “The Sentinel” and “Painkiller”, Jag Panzer’s “Black” and “Hell Destroyer” of The Cage. Especially in the Judas Priest covers, the fans got crazy! To sum up, The Three Tremors live show was a wonderful heavy metal experience – it is so sad that not many metalheads came to see and hear these distinguished vocalists. Let’s hope that there will be another live show of The Three Tremors in Greece.