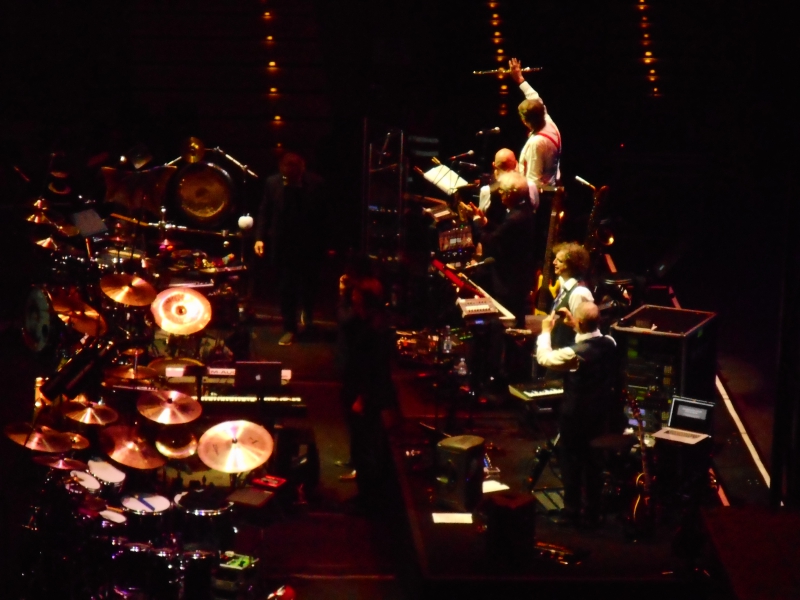 King Crimson was one of the greatest bands of the 70s progressive rock scene. They have released classic prog rock albums, which were ahead of their time and influenced a lot of music genres and musicians, from the 70s until now. For example “In The Court of the Crimson King” and “In the Wake of Poseidon” are considered to be innovative works of art, monuments of pure inspiration and musicianship. But apart from the peerless technique, King Crimson always expressed their feelings through their music and as a result, music journalists include them in the “sentimental” prog rock class. Indeed, I personally grew up with the music of King Crimson and so did countless other music aficionados, who support the band even now, 50 years since the formation of the band - King Crimson may not release new albums frequently, they are still touring now all over the world. Imagine my surprise, when I learned that King Crimson have included my town, Rome, in their tour schedule. We have the luck to see several artists/groups in Italy, but the news of a King Crimson show is always special news. I bought my tickets and I picked with anxiety my old King Crimson vinyls from the dusty shelves of my record collection! A night of nice prog music would follow.

The Rome concert would take place at the Auditorium, a perfect place for sophisticated gigs since there are only numbered seats for the audience and no arena. I can’t think of another, more suitable place to enjoy King Crimson. We arrived there on time, and took our seat, waiting eagerly for the show to start. During the waiting time, you could hear strange sounds from the speakers, obviously selected by the band itself, good enough for us to get in the right mood. We couldn’t help waiting for the band to appear on stage - and when the musicians did so, the audience burst into a big applause. We couldn’t believe it, Robert Fripp was right in front of us!

The band selected an ideal playlist, which included all its classics. We had the chance to listen to great prog rock songs, which the band performed excellently. You can’t ask for more, when you listen to such legendary songs as “In the Court of the Crimson King”, “Moonchild”, “Epitaph”, “Starless”, etc. It was a blast to listen to King Crimson play all this stuff, with their remarkable technique, with their true passion. We witnessed a flawless performance, which sent shivers down our spine and will never be forgotten.

But you will understand what I am describing, only if I mention that the band played with three drummers, whose drum kits were in front of the rest of the band! The drummers performed at the same time and in turns - it was a strange and beautiful spectacle.

Watching King Crimson playing live, it was a dream that came true. I almost shed tears of joy and excitement because of this wondrous live show. It isn’t an exaggeration to say that our jaws were dropped off during this fantastic live show, which ended with the heavy prog epic “21st Century Schizoid Man”.

Every moment of what we experienced this evening will live in our hearts forever. And when King Crimson said goodbye us, we thanked the mythic band with a long standing ovation. Only true music lovers can enjoy such state-of-art concerts, from a band which prefers to speak through music and lyrics. These things happen once in a lifetime!