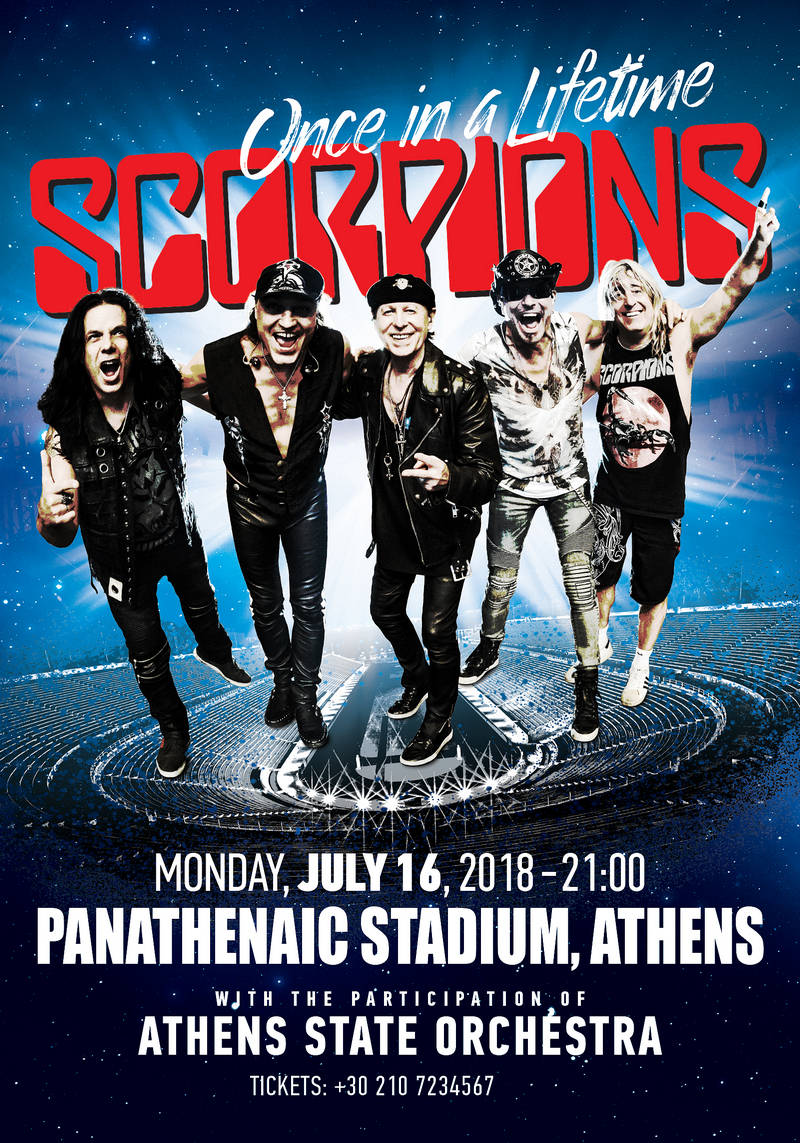 The relationship between Scorpions and Greece is so warm and tight. The band loves to play in Greece and the Greek fans are always there for the band! So, it was no news that Scorpions would visit again Athens, Greece, for a one and only show in Panathenaic Stadium. Of course, many nonbelievers don’t hesitate to blame the band for continuing to release albums and tour, but who can stop rock n’ roll?! So, I didn’t think of it twice – I would be there in this “Once in a Lifetime” show. And I was sure that the Greek fans would also do the same with me. The attendance was beyond any imagination – 40,000 music lovers showed up in the stadium, where the first modern Olympic Games took place! At this point I would like to make a mention – the crowd consisted mainly of middle-aged or even older people, by parents and their children. That’s a nice thing of course, but where did all the metalheads and rockers go? The families outnumbered the hardcore metal fans, nevertheless, that’s a good thing, if you take into consideration that grown-up people are getting familiar with rock and metal music and that children become rock and metal fans. The disadvantage of this is that the biggest part of the audience wouldn’t’ know the older, 70s stuff of Scorpions and would wait for only the ballads, not the heavy ones. Could you excuse me mentioning another thing? The doors of the stadium would open at 7 o’ clock and the show would begin at 9 o’clock with the Athens State Orchestra opening for Scorpions, instead of that though, there were only a few entrances for thousands of people, and as you can understand, the queue was terribly long. Imagine the terrible frustration and nervousness of so many people waiting there to get to their seats, under the flaming sun…that was a mistake of the organizers. The worst thing is that the performance of the State Orchestra started, before half of the audience managed to get in! That’s a shame – part one!

The Athens State Orchestra started its show and played some beautiful tunes, however, I will be honest, I couldn’t understand if the Orchestra interpreted some pop or rock hits in its classical music style – apart from “Rock You Like A Hurricane”, during which Rudolf Schenker got on stage and played the basic riffs of this Scorpions hit. However, it was nice to hear a State Orchestra performing before a rock/metal show. It was a nice intro, something interesting indeed.

The time had come for Scorpions to enter the stage. Almost all fans had got in, when the German band began its show. As the members appeared before the anxious crowd, you could hear a loud, warm applause and the first notes of Scorpions. I was sitting on the upper tier and in seconds understood that the sound was terrible! What the hell was happening? Well, it was obvious that the sound was coming with a delay at the distant part of the tiers, so, if you wanted to listen to the band properly, you should be in the arena!  That’s a shame – part two; That should not happen in a live show, it was another organizer’s mistake and the only excuse is that this was the first rock show in the Kallimarmaro Stadium. I don’t need to say that I immediately left the upper tier and got into the arena, where the sound was perfect! So, now I can talk about the band and its music.

The first track Scorpions played was “Going Out With a Bang”, off their latest, “Return to Forever” album. The crowd was shouting and screaming, although in my opinion, the band needed a more well-known song as an introduction. After that, Scorpions played “Make It Real” and we witnessed a superb concert! The band preferred to play a lot of heavy stuff, many classics from the ‘70s and not so many ballads – many families would expect to hear more ballads, but it was crystal clear that Scorpions came here this time to rock! You can imagine how happy I was to listen to songs like “Is There Anybody There?”, “The Zoo”, “Coast to Coast”, the miraculous medley of “Top of the Bill/Steamrock Fever/Speedy’s Coming/Catch Your Train”, “Tease Me Please Me”, “Black Out”, “Big City Nights”, “Still Loving You” and “Rock You Like A Hurricane”. We lived dreamy moments, we banged our heads, we sang together with Klaus Meine. It was one of the loudest and heaviest Scorpions shows I have attended, just keep in mind that the band paid a heavy metal tribute to Motörhead and Lemmy, with a monstrous drum solo by Mikkey Dee, following the cover version of “Overkill”. Oh God, I would like to know what the parents who were there, thought and what they said later to their kids! Yes, we didn’t enjoy live classics such as “We Will Burn The Sky”, “Born to Touch Your Feelings” and “Holiday”, on the other hand though, enough with these songs, Scorpions have released so many other great anthems!

If you were a Scorpions fan, you would admire the might and the glory of this band. They gave a show full of energy, adrenaline, fun and melodies, a real hard n’ heavy delivery. I have seen Scorpions so many times, and as always, I wasn’t bored or tired – each time is special. Scorpions burned the Panathenaic Stadium!