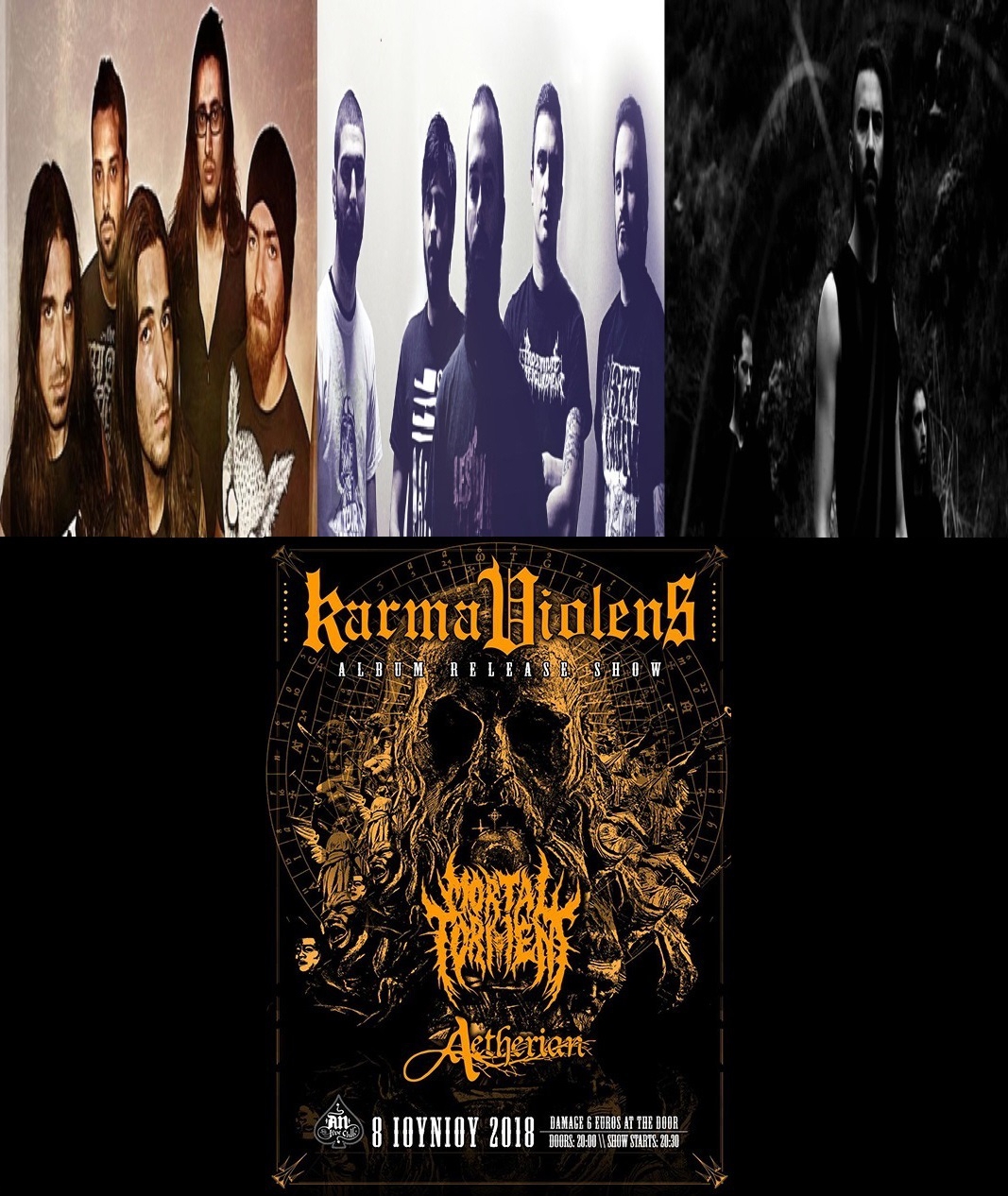 Last Friday was a day of high temperatures during the early hours and extremities during the night. Three significant bands of our scene (two of them are active more than a decade and the third one is a new promising entry) performed at An Club, where the main attraction was Karma Violens’ release show for “Serpent God”, their new, highly appraised opus. However, a few hours before the event, the band informed us that their second guitarist, Costas, would not participate due to an unexpected health issue; hence, my expectations for the proper performance of the new songs were rather low.

After a delay of half an hour, Aetherian, a new band from Athens, started their show. Until the day of the event, I was totally unaware of their music. However, I will surely make up for my mistake, as I was surprised pleasantly by their compositions. The band plays melodic death metal, apparently influenced by the Scandinavian scene, combining melodies and acoustic sections that bring forward thoughts of long distance travels, or melancholy, with appealing rhythmic parts. They played really tight, performing accurately and giving us their energy and positive mood, making the few people of the audience shake their heads rhythmically. Aetherian excelled in their lengthy songs, which feature multiple, different sections; in this respect, “Black Sails”, coming out of their first album “The Untamed Wilderness”, was the most sentimental and ass-kicking part of their show, causing a burst of applause by everyone in the venue.

Regarding Mortal Torment, any reference for them is unnecessary. This band combines two seemingly opposite concepts, “brutality” and “fun”, bonding them in a unique, loving box of amusement. This time, the guys showed us their summer mood, bringing on stage towels, a lifebelt and inflatable, plastic sea balls that they threw to the audience (the gigantic watermelon was absolutely cute). It was really funny hearing their extremely brutal death metal and seeing their fans throwing the balls to each other, during moshing or stage diving. Their performance left no neck intact; crushing drumming, hellish riffing and –above all- the deep growling Nakos’ voice got the place into a mess. I always have fun watching the band’s frontman spitting his guts out and never stop moving, going constantly from one point to another and making sarcastic comments between songs. Unfortunately, serious technical damage occurred that interrupted the show for about twenty minutes. However, when the equipment was restored, the band started again in the same manner, without seeming annoyed or out of rhythm. We look forward to more surprises –and brutality as well- in the imminent future.

Karma Violens, the last act of the event, stayed on stage for 70 minutes, focusing on “Serpent God”. The band, due to its numerous concerts throughout all these years, either as headliners or as supporting act, has developed an undoubted confidence, which was evident from the very first moment. Despite the absence of one guitarist, even at a special event for them, like the release of a new album, they performed without the slightest glimpse of constraint or uncertainty, being absolutely professionals, tight and extreme as usual. Each one of the four remaining members did his best, contributing to our amusement; as for Marios, his vocal abilities are obvious and well-known for everyone who has seen the band on stage (I have already commented on his abilities on my recent review). Of course, the new songs (especially “Dark Morel”) lost some of their diversity and atmosphere without the solos; however, I am sure that they would sound absolutely stunning with a full line-up. “Serpent God” was the ideal opening for the show, casting its darkness and heaviness on the venue, while “Blood Aurora” was the ideal ending, with Marios screaming desperately. In total, the band performed 6 songs of the last album, proving that they are willing to rely on their new material, without omitting their first two releases.

We all had a great time seeing these bands; however, low attendance was the negative aspect of the event. I had the impression that Karma Violens would attract many fans to the venue, since “Serpent God” received positive appraisals until now. On the contrary, only 100-130 people were present. Where were the others? If we want to have great Greek bands in our city, let’s support them.