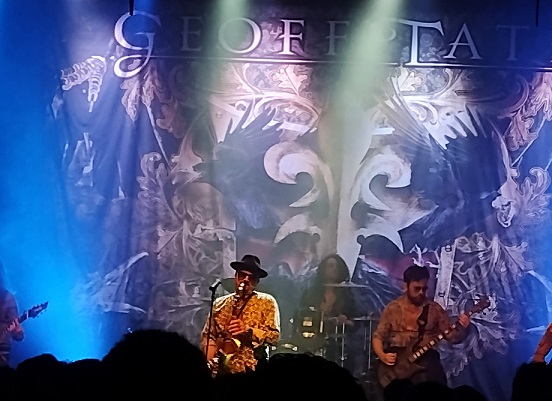 Geoff Tate’s visit to Athens, Greece, is enough in itself for all the good music lovers in Greece: we all knew where we would go that night, all the roads of Athens led to the Gagarin 205 venue, where Queensrÿche’s original singer would perform live. And the news, that Tate would play the “Rage For Order” and “Empire” albums in their entirety, made everyone enthusiastic for this great live show.

The venue was packed with the crazy fans, as soon as the doors opened. Although it was not announced, the evening had a support band – it was Emerald Sun, who would open for Geoff Tate, a traditional epic heavy/power metal band from Thessaloniki. I arrived at the venue some minutes after the beginning of the show, and seeing them on stage was a true surprise for me. The Greeks performed with conviction and passion, they had a nice, tight sound and their material is first class. They chose songs, spanning from their early years until their most recent album (“Kingdom of Gods”, 2022, out via El Puerto Records), and I liked very much their wonderful guitar work and their catchy vocal lines. The fans all had a fun time with Emerald Sun and time went by quickly.

It was time to enjoy Mr. Tate! Yes, Emerald Sun had left and everything was ready. Firstly, the members of Tate’s touring band came in front of us and we were already screaming! In seconds, Geoff Tate, the legendary singer from Tacoma, Washington, appeared on stage, smiling and performing in his unique style. The first verse of “Walk in the Shadows” was a bomb, which “exploded” on our hands – we all were singing together Tate. Three meters before us, Tate was unfolding his art, and we all stood there, breathless, don’t believing our ears and eyes! Geoff Tate was in a perfect shape, having recovered from his health issues, acting like a teenager. That was amazing!

Geoff Tate’s show included two parts – the first part was “Rage for Order” and the second one was “Empire”… as you can surely understand, it was Queensrÿche fans happy hour! Yes, we enjoyed these classic progressive metal albums in all their majesty, in all their beauty and charm! We lived singular moments of progressive metal art, we experienced the perfect sound of Queensrÿche with Tate’s vocals! It was a miracle, almost two hours of music perfection, a dream that came true for so many fans, who were punctual in their rendezvous with history and art!

The live show ended with an encore of two songs – “Last Time In Paris”, “Take Hold of The Flame” and “Queen of the Reich” … it was the best way to end for this compelling live show, with the fans singing along like lunatics! Geoff Tate thanked us and we thanked him for changing again our life! A phenomenal concert by a phenomenal artist!