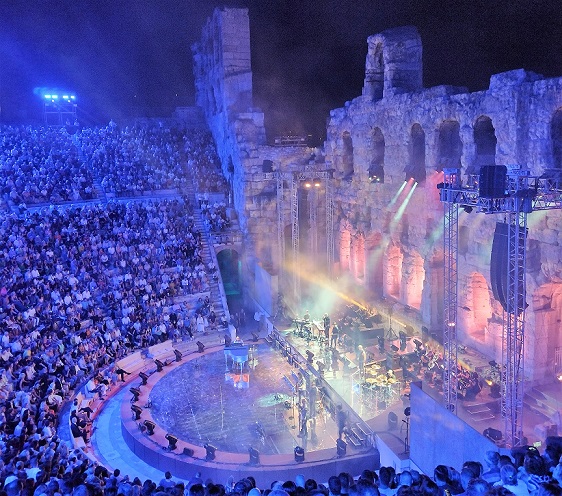 I had no great expectations, when I first learned that a Desmond Child concert would take place at the Odeon of Herodes Atticus. I am a great fan of the classic, top hits of Desmond Child, such as “You Give Love A Bad Name” (Bon Jovi), “Angel” (Aerosmith), “Poison” (Alice Cooper), and so many more, with which generations and generations grew up. Desmond Child is one of the biggest songwriters of all time and his offering to music is undeniable! However, I didn’t know how much organized the certain music program would be, how much musically compact and solid it would be. The artistic director of the show was Foivos, the famous Greek composer, but that didn’t guarantee anything, since almost all of the Desmond Child songs are in a pop and/or a rock style. With these on my mind, I reached the ancient Greek theater and decided that of course, the music would do the talking.

Before proceeding with my comments, we must stand on the fair, significant cause of the whole event, which was the reunification of the Parthenon marbles. We all have to thank Desmond Child and all the artists who participated.

It is so nice to see that hundreds of people decided to support Desmond Child. The event was sold-out and music lovers of all ages, couples and families, filled the place. Well, you will ask me, “hey, do all these people really admire Desmond Child and his contribution to pop/rock music?”. I will answer “no”, but I think that when it comes to music, and with such a sacred cause, we must not think this way. All were there to sing, have fun, even if they were rock fans or just glamorous ladies!

Desmond Child, dressed in a blue extravagant costume, got on stage in time, sat behind his piano, and the show began. The great songwriter, a rock band, some backing vocalists and the Athens Philharmonia Pop Orchestra, performed some of his beloved compositions, which were sung by several artists. We enjoyed The Rasmus, Alice Cooper, Bonnie Tyler and Sakis Rouvas, who were perfect at their performances – it was a shock to see Alice Cooper sing “Poison” and “Bed of Nails”, and you could understand that the audience really wanted more from Alice Cooper.

Most of the performances were mediocre though, since the vocalists that Desmond Child and Foivos had chosen didn’t make good covers – for example, Justin Benlolo was too “small” against classic songs. Also, Linda Wilson and George Lembesis failed to sing “Angel” and “Born to be My Baby” (Bon Jovi) respectively.

Soundwise, there were problems, as we couldn’t hear the strings of the Athens Philharmonia Pop Orchestra, the guitars were blurry and the drums too loud in the final sound production. So, I was right, when I feared that the sound wouldn’t be tight.

In general, we witnessed a fine artistic event, where the true protagonist was music. We all had a good time, listening to Desmond Child’s big hits, listening to his words and stories, and enjoying a hard rock legend, Alice Cooper. There were good moments, indifferent moments, even unsuccessful moments, however, the event finished gloriously with all the singers on stage, in white clothes, singing “Livin’ On A Prayer”. Yes, we left the theater with a big smile on our face. 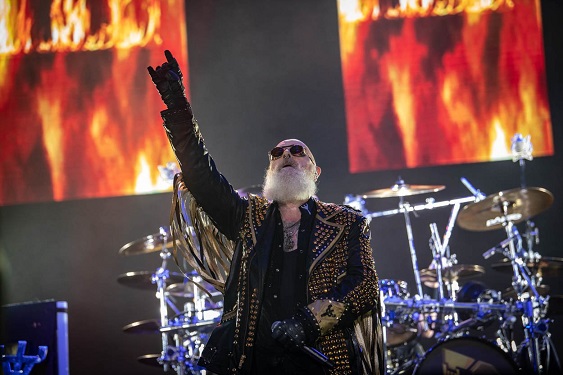 The pandemic is now over and that enabled Judas Priest to resume their tour, in celebration of their fifty years. The Priest visited again Athens, Greece, in the frames of Release Athens 2022 Festival and all the metal maniacs joined this metal feast. The 15th of July, 2022, was a heavy metal day and … all hell broke loose! One day before Iron Maiden played live at the Olympic Stadium of Athens, we had the opportunity to experience another heavy metal marathon, which began that Friday, early in the afternoon, with Black Soul Horde. Unfortunately, I didn’t catch the set of this Greek heavy metal act– and that was a pity, since I like very much their discography (especially their “Land of Demise” album). But I was right on time for the live show of The Dead Daisies. Like many other people, I am familiar with this supergroup, I am very fond...