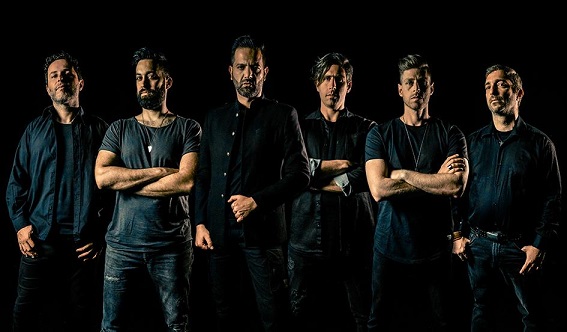 Sands of Eternity were on a long hiatus, but now they are back with a great new sophomore album! "Beyond The Realms Of Time" is a fantastic melodic power/prog metal album, ideal for fans of Iron Maiden, Helloween, Stratovarius, etc. With the guidance of Bob Katsionis, Sands of Eternity reveal their true, hidden power and become part of the Greek power/prog metal front. Myth of Rock, shocked by Sands of Eternity and its musicianship, came in touch with band leader and guitarist Ioannis Ioakimides, and we had a nice chat! Come on, let's follow the path of Sands of Eternity!

Hello, guys. I know that you were formed in 1996 and released an album in 2002. What did you do afterwards? How did the band become active again? How do you feel now that you have just released your new album?

Hello, that is a good question, since from 2002 to 2022 it is twenty years that passed by. The original band of 2002 – called Hourglass Sands Of Eterrnity - broke apart and everyone followed his own path. I, as the main composer of the band, kept on writing heavy metal songs. In this journey I met with our current singer Michael “Dice” Papadakis who showed great interest in the songs and we have tried in various times to record some of them in a home studio approach. Then in 2021 eventually ten new songs were accumulated, and it is then, when I decided that a proper album is needed. So we cooperated with Bob Katsionis who assumed the role of our producer and we changed the name of the band from Hourglass Sands Of Eternity to Sands Of Eternity to mark our evolution to a new era. The end result was “Beyond The Realms Of Time” and now that we finally have our new album in our hands we feel not only happy, but also a great sense of accomplishment.

Can you present the members of the band?

When were the songs of “Beyond the Realms of Time” composed? How different are the new songs of Sands of Eternity compared to the songs of “Journey to Infinity”?

Most of the songs of “Beyond The Realms Of Time” were composed the last five years, but there are some that were composed before that, as far back as 2002. The main differences with “Journey To Infinity” is that the sound is much more fresh than back then, there is an evolution in terms of aesthetics in the new album and of course there is a change in the vocals, where I believe that Dice sounds more mature than our former singer.

The music and the lyrics of the new album belong to Ioannis Ioakimides. Describe the composing process of “Beyond the Realms of Time”. Which was the contribution of the other members?

The composing process is mainly me writing the song (music and lyrics) and presenting it to the other members. Of course, a distinct part is played by Dice, where we work together for the melodies of the voices. In this stage I want to stress that both Michalis Skoutelis as well as Kostas Nanos are new additions to the band, after the album’s release, but they have integrated very well to the spirit of the band with a great chemistry with the rest of us.

Bob’s contribution was essential not only, because he acted as a producer but also played the keyboards for us. So, after having recorded the rhythm and lead section for each track we collaborated with Bob very well in the writings of the vocals, where again his contribution to them was seminal, especially in the backing vocals part.

Give us all the information about the new album cover. Who did it and how is it connected with the content of your music/lyrics?

The artwork was made by Uwe Jarling under the guidance of Dice, Bob and me and we believe that the final work is excellent and lives up to the high standards we set forth for this album. It represents a passage through time, which for us is the evolution from the old to the new band. Even though not semantically directly connected to the lyrics still this message on its own highlights exactly the position of the band in the beginning of its new era.

Where do you think that Sands of Eternity differ from the other power/prog bands? Which are the characteristics that make your sound unique?

In terms of compositions, we try to have a distinctive lyrical and epical approach to our melodies, our vocal progression and our riffs, so that might be one differentiating point. The other one is the lyrics where we try to encapsulate a story or a personal though through in a way that not only serves as a natural extension of the music, but also has a meaning of its own. And finally I would highlight the singing of Dice, who literally gives meaning through his singing in every word of our lyrics.

You releases a video for “Enlightened (Mighty Warrior)”. Why did you select the certain song for a video? How did you experience the shootings of that video?

We selected “Enlightened (Mighty Warrior)” as we think it encapsulates many themes that we can find on the album as a whole both in terms of musical arrangement as well as in its lyrics, so it is a very representative song for our style. The shooting of the video lasted half a day and was directed by Bob Katsionis with the help of Alex Charitakis. It was shot in a hill in a suburb of Athens and the process itself even though a bit tiring was quite fun and enjoyable.

How easy or difficult is it for a new Greek power/prog metal band to be successful? Why?

It is not easy to achieve success in the Greek power/prog scene for any band, if it stays within Greece’s boundaries, as the Greek market is relatively small for this genre. For a band to be successful in this it must aim for an international career with a lot of live appearances both in Greece but most importantly abroad. Also it should have a good promotional mechanism for its material in order to reach as many listeners as possible, which in turn implies the existence of the related budget either from the band itself to begin with or from a dedicated company that would take the band under its umbrella.

If you had the opportunity to have a famous guest musician in a Sand of Eternity song, who would you choose? Why?

As a guitarist, I would want to play with Adrian Smith of Iron Maiden. I always admired the vibe and feeling of his solos both in Iron Maiden as well as Bruce’s Dickinson albums.

Concerts – do you plan to give some live shows? What should we wait from Sands of Eternity on stage?

Yes, it is in our immediate plans and we work hard towards this goal.

I want to thank you for the opportunity to present ourselves, and I want to say stay all tuned in the metal world and keep rocking!