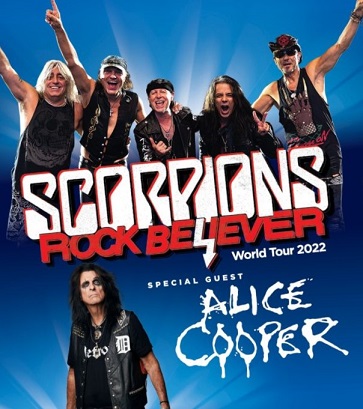 Scorpions and Alice Cooper are giving a live show in Athens, Greece, so they gave a joint interview to the Greek media on July 4th, 2022. Myth of Rock was present at this press conference, which took place at the Public store. Below you can read what happened that day in this important meeting.

As soon as the news of the Scorpions/Alice Cooper concert in Athens was shared, every fan of the Scorpions and Alice Cooper was stoked - a feeling of euphoria filled our heart, knowing that in some days, we would enjoy this mythical live event! Myth of Rock got an invitation for the joint press conference of the artists and as you can understand, we couldn't say no. I was at the Public store one hour before the conference, just to secure our seats and get familiar with the place. I could see the seats, where the artists would sit, I read the names and was excited. In a matter of minutes, the place was full with journalists and photographers from the Greek media. At 12.45 pm Alice Cooper and the members of Scorpions entered the room and we all were shouting and applauding with sheer joy. The artists took their seat and with a big smile on their face, they saluted us. Klaus Meine and Alice Cooper made an introduction, and then they were available for our questions. I must mention that the Greek Sting Fan Club gave a present to Scorpions and Maria Papalambrou gifted all the musicians with a copy of Caroline Rovithi's new book, “All you need is Greece”.

Klaus Meine: Thank you so much for coming up this morning to see us, it is great to be back in Athens, this time we have a fantastic package for you. Together with Alice Cooper we will rock this town again, we can’t wait to share our new show, our new songs from the new album “Rock Believer” with our fans in Greece. We are very excited to be back.

Alice Cooper: We are finishing our European tour right now and we are very excited especially for this show. We have played with Scorpions before, we had a great time. I remember we did a Russian tour together, that was really fun […] you know, we are both hard rock bands, it will be a loud, hard rock, guitar-driven show. People say that “rock is dead”, they shall come to this show, rock is not dead!

Klaus Meine: Exactly, that’s what we also say, that’s why our new album is called “Rock Believer”! There are so many rock believers out there! It is so great to see all these new generations joining the party, it is so much fun to play for all generations of fans, to see so many kids singing classics like “Rock You Like a Hurricane”, “Black Out”, all these songs! I am sure that Alice sees the same thing every night.

Alice Cooper: It is surprising, when we came to Europe this time, we saw so many young people in the audience, and I think it is, because they found their parents record collection and the parents played along our songs. These kids grew up with our songs and now realise whose songs are these. It is a really young audience, all through Europe. There is a new generation of rockers out there.

Maria Papalambrou: We have a limit of age (7 years old) in the concert for security reasons, and people keep asking, “We can’t I take my child with me?!”. There are so many children aged five and six years old, who want to be in your concert!

Klaus Meine: Last time we had a tour with Alice and his band we were in Russia, and our plane dropped in the middle of the flight a thousand meters or something, and we were like, “Oh my God”!

Alice Cooper: I don’t know if you remember, guys, that at the end of your show you had cheerleaders! I remember seating there looking at these beautiful girls, haha! At the last show of the tour we were the cheerleaders, when you finished your show, haha!!

Klaus Meine: And of course, we have great memories, coming back to Athens, last time we came here we played in Kallimarmaro, it was a huge honor from the city to play in this very original, Olympic Stadium, which was used for the first Olympic Games. And it was such an amazing experience to play in this beautiful place, so fantastic … so many shows we have played here, I remember the one we played in the Lycabettus mountain, where we did the MTV Unplugged. We have many, many loyal fans in this country, for so many years, it feels like we are coming home, it is always very special for us. It means a lot to us.

Alice Cooper: It is mythological, haha!

Mikkey Dee: Yes, when we come here, it is like coming home, I see my relatives, and of course, all our crazy fans!

How much future do you see for innovations in hard rock music?

Alice Cooper: I guarantee you right now that there are many teenage guys and girls in garages, learning to play Scorpions songs, and Alice Cooper songs, and Guns n’ Roses songs, and Aerosmith songs. I think when Gene (Simmons) said “rock is dead”, he meant it financially. The spirit of rock n’ roll is not dead at all. There are so many good bands, like Foo Fighters and Green Day and hundreds of others, look at all these young bands coming up, like Greta Van Fleet. They are pure rock n’ roll, hard rock bands. Rock n’ roll is never going to die, the reason why we are here is rock n’ roll. Grunge had its period, punk had its period, emo had its period, hard rock goes right through all of those. The Rolling Stones are still playing and they are still great. So, hard rock is not going to die – at all. Fifty years from now you will be asking the same question!!

Klaus Meine: It is something that is really hard to describe, you know […] There is something in the music, there is a certain vibe. The Greek fans always like the hard rock side, the hard rock songs, but they also love the ballads. All the beautiful Greek ladies, who come to see us, enjoy it very much, when we play ballads, like “Still Loving You”. There is something in the music, like they say, “let the music do the talking”, there is a connection right there. Of course, in all the other countries of the world, where we play live, people might say something similar … It is something difficult to describe, I think our fans know exactly what it is and we know what it is, because it is in the feelings […] It is very, very motivating and inspiring seeing all these kids there being “rock believers”, you know … “Scream for me, screamer, I am a rock believer, just like you”!

Pawel Maciwoda: To this point, I would like to add that Scorpions music and Alice Cooper music is not super aggressive, it is about peace, love, understanding, forgiveness, and all these positive things. That’s why this music is not dead, because it carries a positive message.

Klaus Meine: Talking about positive messages, I remember that some years ago, in our Russian tour Alice Cooper invited me on the stage and I was about to kill him with the guillotine, hahaha!!! 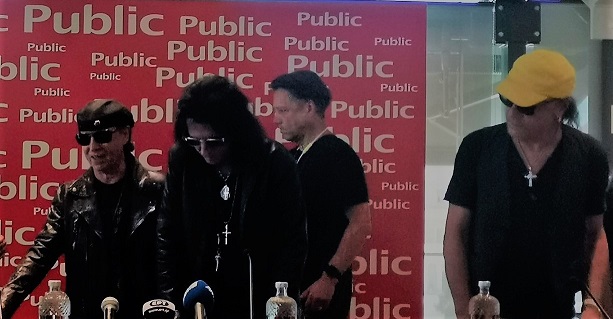