In a time that you find less and less melody in music, comes Leah and her ethereal music to bring everything upside down. Leah lies there, where metal and chill out music meet. Please welcome the "metal Enya" and listen to her Celtic fantasy metal songs! Her latest album, "The Quest", is a masterpiece and Myth of Rock is here to spread the news. We spoke with her and you can read all her sayings right below. The "Leah" chapter is a very interesting, an exciting part of the book of contemporary heavy metal. Enjoy!

How did you decide to begin your career as a solo artist?

It's a bit of a backwards story as I didn't record my first album until after I was married and settled down with kids. Not very typical of me! I've been a songwriter since I was about 13-14 years old, though.

Your music is described as “Celtic Fantasy Metal”. Do you agree with this definition?

Yes, I think that describes it generally. Sometimes it's less metal, but even hardcore metal fans tell me they still want to listen to it when they're in more of a chill mood.

Why people should listen to your music?

If someone is looking to feel like they're in an otherworldly place, transported to another era full of magic, ethereal beings, and beautiful landscapes, I think they'll like this music.

How do you react, when people say that you are “the metal Enya” and your music is “chill out music for metalheads”?

I think it's cool! I usually embrace the terms fans come up with - it gives me insight into the music I didn't objectively have.

What does inspire you to compose your songs? Which artists/bands are your “music heroes”?

Inspiration often comes from places I've been, photos, and fantasy films and TV shows. I tend to bank it all up and then it comes out one day while I'm doing something mundane like doing the dishes. I have many music heroes, spanning across different genres, from The Doors, to The Tea Party, Sarah McLauchlan, Loreena McKennitt, to Symphony X, Dream Theater, Within Temptation, and many more.

Your unique voice is so warm and ethereal but also with a rock color at the same time. What do you feel every time you sing?

Thank you. I'm usually focused on the emotion of the song and lyric. I try to stop thinking about technique when I record and let it flow.

Give us all the details about “The Quest” album: when did you compose the songs, where did you record them, who did the production, who did the mixing and the mastering?

I composed the songs over 2 years, basically writing and recording them one by one, and adding all the final vocals at the very end. I composed and did all the pre-production from my home studio, and Oliver Philipps was the producer. He also did all the orchestration and we collaborated on the arrangements. Jacob Hansen did the mixing and mastering.

You have an impressive amount of great musicians contributing in your new album – Troy Donockley, Barend Courbois, Timo Somers, Sander Zoer and Chen Balbus. How did it come and you collaborated with them?

I asked! :) Most of all these introductions came by way of mutual friends or acquaintances.

Where would you trace the differences between “The Quest” and your previous recordings?

"The Quest" became its own animal and I decided to not try and fit into any mold. That meant accepting that it may not be as heavy as my previous album and just be ok with that.  The recording process was really different in that Oliver and I worked very closely and he's much more picky than I am, which is a good thing in many ways, but it made for a much longer process. 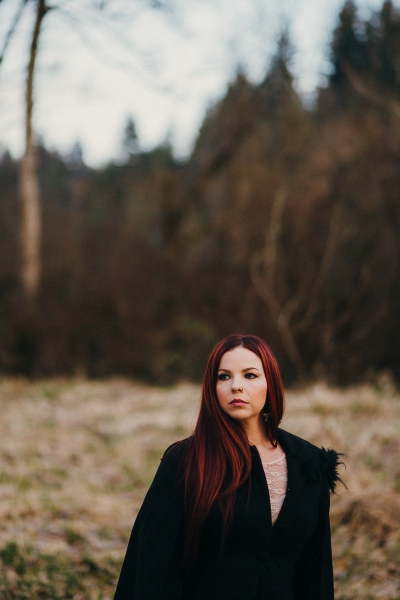 Which is your favorite song from your new album and why?

It changes depending on my mood, but I do love "The Quest"! Also "Ghost Upon a Throne" has nostalgic ties for me.

I believe that “The Quest” is such a good album that you will surely have a big success. Do you agree with me?

Why are you not a touring artist? Are you planning to tour one day or do you prefer to be a studio musician?

Mainly because I have a big family and the logistics never made sense for me. For now I'm a recording artist, but definitely, have the itch to tour one day. I'm also doing things backwards in that many artists tour when they're first getting started as a way to promote and get their name out there. Instead, I'm building my following online around the world first, so there will hopefully be demand for a tour.

How are you in your personal life? Are you the romantic fairy or the badass rock woman?

You are the composer of your songs. How do you feel when you are composing your songs and which are your feelings, when you listen to them, after the mixing/mastering is done?

It's always magical when I get mixes back - it sounds so different! Always better. Mastering takes it to a whole new level once again. It's like waxing a sports car. It's good without it, but it doesn't really shine until after the treatment.

What about the lyrics? Do you write the words of your songs? Where do they refer to?

Yes, I write all the lyrics. Sometimes I have no idea what they are about, as some of my songs "write themselves" - so maybe they come from my subconscious. Other times, I do research in Wikipedia on a topic, like in the song Heir - I was researching Scotland's national animal in Wikipedia, which happens to be a unicorn. So that's where that song got its inspiration.

Are you a person who is always inspired or do you sometimes need a boost to get inspiration?

Inspiration is something you have to tap into. It's there but is easily ignored. I find when I am open all kinds of ideas are already there, lying dormant. So I keep my phone nearby and sing into my voice memo app as soon as something comes to me.

Which are your hobbies? I am sure that you read fantasy books and watch fantasy movies!

I don't have a lot of time for novels these days, but I do love fantasy TV series and movies like Outlander, The Hobbit, and so forth. I'm often working on my music, so I consider that my hobby, and when I have time, I do like crafty things like chainmaille and sewing.

You had collaborated with Eric Peterson in the past. Describe to us how this collaboration was. Is there any chance of collaborating with Eric in the future?

Yes, that song was quite spontaneous and we often talk of doing more. I recently sang on his new Dragonlord record, you'll find my voice on several tracks including choirs and solo parts, such as in the song "Love of The Damned".

You are in Inner Wound Records. Are you satisfied with your record label?

Yes, we've been working together for the past several years. It's a different kind of partnership than most, in that I retain my independent status, which I love. It's great to have people on your side that truly care about you in this business.

Definitely more music! I'd like to do a non-metal fantasy album, and then another heavier album again. Let's see what happens!

Leah, thank you very much!