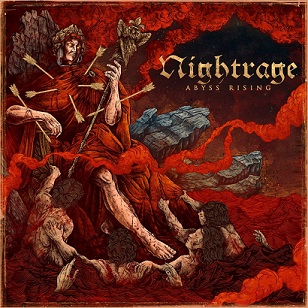 I always considered Nightrage as good “educators”; in simpler words, they have “educated” us, through their route over the years, to expect specific things from them. Iliopoulos, a Greek immigrant to Sweden, has a musical instinct with roots in the classic heavy metal vault and the melo-death scene of the country he permanently resides in. This instinct remains untouched by experimentations or trends that might warp his musical conception. Hence, the announcement of every Nightrage album is met by everyone’s certainty about its content. We all know that we’ll get simple lessons of Swedish melodic death metal; nothing more, and nothing less.

“Abyss Rising” couldn’t be an exception in this respect, being a direct continuation to the band’s recent works, and as guitar-oriented as Marios wished. Many chefs usually don’t change a successful recipe; they avoid substantial alterations, preferring to meddle with slightly different analogies. Similarly, Nightrage’s known elements are once again present: familiar and trustworthy, away from unexpected (pleasant or unpleasant) occurrences. We talk about an aggressive and melodic album, with countless leads, traditional melo-death (rather shrieking) vocals, double-bass drumming, and many tranquil/acoustic parts.

“Abyss Rising” features Nightrage’s widely-known sound, based on Marios’ abilities on guitar duties. It’s a cohesive structure, full of excellent combinations of traditional, Scandinavian melo-death patterns with leads that indicate Marios’ heavy metal origins. Constant changes of rhythms and temper keep you in suspense all the time. You hear aggressive, addictive melo-death riffs and emotional leads and solos that emerge timely (including the instrumentals), indicating profoundly Nightrage’s name and the band’s ability in composing ideas that -despite sounding ordinary- have something to offer to the listener.

The rhythm section of Escalona (bass) and Stamoglou (drums) remains solid, making the sound more concrete and deeper. However, the main attraction is Nyman (or, more precisely, the way Nyman is integrated in the band). His vocal abilities are already proved; but now, his collaboration with Iliopoulos and Söderman is more than ideal. He has more space to deliver the most expressive performance since he started working with the band, but I wish we could hear more often his deepening growls, and not just sporadically.

Sincerely, I cannot find even a single filler in this album. You can hear Nightrage’s trademark in songs like the homonymous aggressive opener, “Swallow Me” (probably the hidden hit of the album), “Dance of Cerberus”, “Falsifying Life” and “9th Circle of Hell”; all these tracks contain patterns that you will refer to later on. Also, pay attention to the heavier “Nauseating Oblivion”, and the dark “Shadows Embrace Me”, where Marios’ lyricism makes a contrast to the song’s mood.

As I was listening to the closing instrumental “Silence of the Darkened Soul”, trying to discharge myself sentimentally from what I had heard, I thought that the band in “Abyss Rising” functions like an automatic pilot. Marios “invested” some years ago in a new line-up with Söderman and Nyman, and now he rips what he sowed. I consider “Abyss Rising” as the most diligently structured and mature album of this triplet, meeting the standards set by “The Venomous”. It might not be a groundbreaking contribution to the over-saturated Swedish scene, containing some repeated things compared to previous albums, but it’s another worth-mentioning addition to the band’s discography and a must-heard choice for those who prefer their melo-death pure, uncontaminated by external influences of any kind.