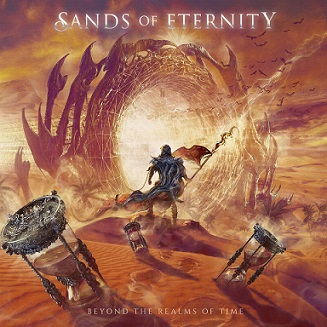 Sands of Eternity is an evolution of Hourglass Sands of Eternity, who were formed in 1996 and released their debut in 2002 (“Journey to Infinity”). The Greek band has just released its new album, which includes ten songs, composed by mastermind and guitarist Ioannis Ioakimides, in a heavy/prog/power metal style. Imagine a fine blend of Helloween, Stratovarius, Iron Maiden, Judas Priest, Iced Earth, Kamelot and Rhapsody of Fire – in “Beyond the Realms of Time” you will enjoy a modern edition of the classic power/prog metal sound, which shows which the future of this genre shall be. The songwriting is brilliant, the performances are marvelous and the production ideal – Bob Katsionis is on the production helm and has done again a perfect job, and I would say that the co-operation of Ioakimides and Katsionis was critical and fruitful. The phenomenal work leads to great compositions and a final result, which will satisfy even the doubters – “Enlightened (Mighty Warrior)”, “Desire”, “Red Flag”, “So Far Away (A Soldier’s Cry)” etc. are top class songs, with strong melodies, catchy vocal lines, storming and melodic guitars, elegant keyboards and an unmistakable rhythm section. Sands of Eternity takes you on a venturesome power metal ride, which ends at the edge of a colorful rainbow of sounds. The Greek quintet has beautiful aesthetics, a composing genius and a wise musicianship, making “Beyond the Realms of Time” a power metal gem, which should be a part of your record collection. Sands of Eternity and its new album are here to stay, promising a bright future. Fans of power metal with prog elements will have a great time with this album!