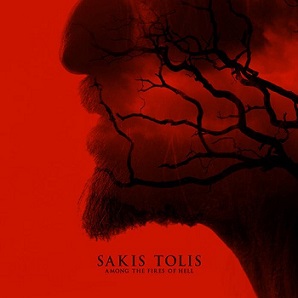 Sadly, lockdowns affected psychologically most (if not all) of us. However, there was a counterbalance factor that negated -at some extent- the effects of containment measures: in many cases, creativity offset abnormality. Creation is a valuable tool in the hands of daring spirits, who seek ways of expression or redemption, even during conditions that are far from what we call “unanimously normal”.

Let’s have a look at the example of the most prominent figure of Greek black metal. Would you expect that there would be a time, when Rotting Christ’s mastermind would engage in something personal? Would you expect to listen to a Sakis Tolis’ solo album? Though it seemed untrue a few years ago, it eventually happened. Those who are aware of Sakis’ career, know that he seldom rests. He always meddles in something: reading about other people’s traditions, mythologies and cultures, composing, touring. However, lockdowns prohibited artistic events of any kind. Given Rotting Christ’s exogenously inflicted inactivity, Sakis resorted to the only way that would enable him to spiritually escape from his isolation and struggle while staying at home: composing a personal album.

That’s how “Among the Fires of Hell” occurred. It’s an exclusively personal work (Sakis played all the instruments, except drums, where he got Fotis Benardo’s help) and -above all- a testament to a man’s effort for artistic/spiritual ascension and communication. That was exactly his intention, and the reason he self-released the album, making it freely accessible to everyone. Economic matters had nothing to do with that specific occasion.

Aesthetically and musically, the album sounds familiar, referring directly to Rotting Christ’s mid-era (1997-2000), when they were experimenting with gothic romanticism and darkness. The orientation to “A Dead Poem”, “Sleep of the Angels” and “Khronos” is more than explicit. Probably, you don’t have to hear the lyrics of the album’s homonymous song (“Let me sleep the sleep of the angels…”) to reach to this conclusion.

Sakis’ decision to look back might please Rotting Christ’s fans who aren’t satisfied with the band’s recent works, commenting that they aren’t “guitar-oriented”. “Among the Fires of Hell” is full of melodic, catchy riffs, that will surely remain to your mind with their straightforwardness and gothic beauty. Even after the first listening session, you’ll have a strong inclination to repeat silently the main themes of “My Salvation”, “The Dawn of a New Age”, “We the Fallen Angels”. That’s exactly where lies the strength of the album: Sakis makes you follow his steps through melodies that, without being simplistic, have the ability of absorbing you with their melancholic and nostalgic tone.

“Among the Fires of Hell” contains mid-paced songs, that shine through an inner, dark light. Sakis is proficient in creating leads and solos, representative of the Greek black metal (we all know that!) and using them under the prism of a gothic mosaic. Some recitation intros by Andrew Liles and sporadically used chants make the ideas more mysterious and intriguing (seemingly minor details that make the difference).

Apart from this style, elements from Rotting Christ’s recent period contribute discreetly to Sakis’ creation as well. Watch how splendidly in “Nocturnal Hecate” (a Daemonia Nymphe cover) he retains the original creators’ aura, that eerie essence like a flimsy vale, and integrates it into his personal trademark. The ancient Greek paeans, the traditional wind instrument and the overall structure constitute a grandiose pagan/folk composition, emerging from “Theogonia” or “Aealo”. Similarly, the slow, repeating pattern of “The Silence” weaves a mystery, reminding the latest albums.

Irrespective of what you think about Rotting Christ’s different aspects, “Among the Fires of Hell”, without being innovative of course, is pleasant to the ear and cohesive (both musically and aesthetically), revealing exemplary composition and production. But it’s not just that. It represents Sakis’ soul and, as such, it might speak directly to your inner self and cause a pleasant shiver. It might wake (seemingly) hidden emotions, and make you feel nostalgia for things that you left in the past but didn’t completely forget after all. And usually, music causes peculiar connotations to fans who tend to experience it, rather than just listen…