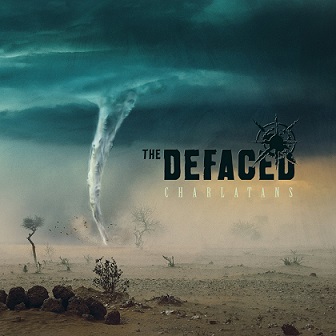 The Defaced, coming from Helsingborg Sweden, have been through hard times in the past. For a band that has been around a bit more than twenty years, their new album “Charlatans” comes as their absolute rebirth. It seems that the previous years, where the band has split for a period of time, has now worked on their behalf, as the new album comes in an emphatic way. Their own way. “Charlatans” incorporates everything that is on the band’s DNA. Thrashy riffs, groovy tunes, melodic rhythms, catchy vocals and all this blended in a very interesting way. Especially the melody is everywhere, where we need to mention the great job done by the vocalist Jens Broman (not only on all choruses, but also on how each song evolves within itself – note: the vocals were produced together with Björn Strid from Soilwork, The Night Flight Orchestra!), who has added great quality with his clean vocals to every single song. Original members and guitarists of the band Klas Ideberg and Mattias – Swaney - Svensson really play amazing crunchy, heavy and menacing riffs on this record, something that comes as no surprise, especially for Swaney, whom we met previously with Kayser and we know very well what he is capable of. There is a lot of groove and headbanging on “Charlatans”, where Robert Hansson (also known previously from Kayser – among others too) plays fantastic drums. Credit needs to be given also for the lyrics, where “Charlatans” – in my humble opinion – really excels too, and is one of the band’s best work to-date. And there are a lot of different influences on the album, to mention some I would say Testament (particularly from the ‘Low’ period), Alice in Chains (especially on the slower passages of the record and also on the sophisticated way of building the melodies along with the heavy parts within the same song), and also Machine Head (on the heavier and groovier parts). This is a great comeback album for The Defaced, who are back in business (I hope for good!). “Charlatans” encompasses everything that the band is proud of and provides the foundation for an even better future, where – through this great album - they will try to take the next step.