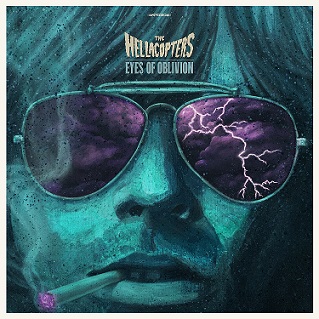 The band , The Hellacopters. The year, 2008. Following the end of ‘The Tour Before the Fall’.

Fans are trying to understand what has happened.  The band, after the release of the cover album “Head Off” and actually, the breakout announcement, has decided to officially terminate any activity, any future plans, any sign of pulse. All members decide to focus on other bands, projects, anything else, except any discussion about the Hellacopters. All hiatus activities included: Death Breath, Imperial State Electric, Lucifer for Nicke Andersson, Dundertåget and solo career for Robert Dahlqvist (R.I.P.), Tramp for Robert Eriksson, Baby Woodrose for Kenny Håkansson. Then the original line-up reunited for some live shows in 2016 and 2017, when an exclusive 12-inch vinyl record was released, with two tracks ("My Mephistophelean Creed" and "Don't Stop Now"), written during the “Supershitty to the Max!” sessions, but recorded in 2016. Something is moving… In the meanwhile, line-up changes come forward (Kenny left, Sami Yaffa and later Dolph de Borst joined) with Dregen back for good, of course. Speaking of Dregen, “Eyes of Oblivion” is the first full-length album of The Hellacopters, since 1997 and the mighty “Payin’ the Dues”! So, April 1st will try to make things look like an illusion? Like a lie? I don’t think so… This is the perfect moment for the band to release a record, re-establishing themselves, actually where they have never left from. High energy rock n’ roll has always been the trademark, the motto of the band, what characterizes them the most. And this is exactly what the new record is all about. Guitar riffs like there is no tomorrow. Badass and dirty rock n’ roll attitude by the ones who know it best. Heavy drumming from one of the finest players out there. Vocals from the one who is responsible for the band’s identity, reminding us what they are made of and what they are capable of: playing rock n’ roll, (seriously) kicking our ass! The album starts with the cataclysmic “Reap a Hurricane”, where the crescendo of the guitar duo is reaping everything in front of them, where the piano riffs of Boba Fett (Anders Lindström) remind us of the glorious past, but not in any second being repeated. And this is one of their big success here: their much celebrated past paves their way open ahead, but with a brand new and fresh mindset, attitude, spirit. “Can it Wait” makes us wanna listen this one live, as soon as we meet them again. This is definitely another guitar oriented album, where both Nicke and Dregen enjoy it to the fullest. “So Sorry I Could Die” slows down the pace, again with beautiful piano, and Nicke really has some beautiful vocals on this one, a special song as it is a kinda tribute to Strängen, a powerful ballad which is definitely going to be a future classic! “Eyes of Oblivion” coming up next, it is a typical Hellacopters anthem, straight from the “By the Grace of God” genes, with a dominant groove and a gorgeous chorus with double vocals. You just wanna dance to its rhythm and sing-along the main chorus. Pure joy! “A Plow and a Doctor”, “Positively Not Knowing”, “Tin Foils Soldier” and “Beguiled” add to the electrifying feeling and character of the record. It is worth mentioning that, according to the band itself, there are a lot of songs on this album which have been written during the past years. Which easily shows that this is both old and contemporary Hellacopters, a young/new-born record but with an old – mature soul that has a lot more to say to its audience. “The Pressure’s On” does not add stress and anxiety to the band at all, as this old school, easy going and brilliant ‘travel friendly’ song will certainly accompany our upcoming road trips and other travels. This one kinda reminds me of Tom Petty and the Heartbreakers in a way. “Try Me Tonight” is the perfect – dynamic – way to end the record, another one to be played live and make the fans scream and dance along.

This is 2022. The album “Eyes of Oblivion”. The band has grown and matured throughout these years (how far did we say is 1996 ...?), but nothing has stopped the progress within, nothing has prevented the band from striving for more creativity, excitement and of course high energy rock n’ roll! This is a brilliant album, which definitely rocks hard for good and reflects all the DNA characteristics of this fantastic band. It has everything their fans were longing for in many years, and now they can enjoy every second of it. Looking forward to see the band playing it live, on a venue ‘near you’!