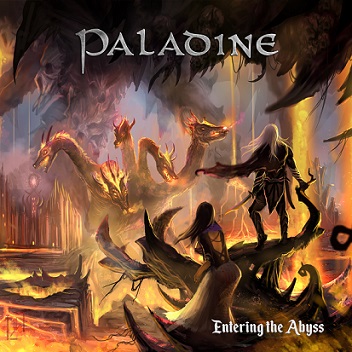 Almost four years have passed since the release of Paladine’s first album and now the Greek band makes its glorious return. “Entering the Abyss” is the second offering of Paladine and naturally, it marks a huge progress for the quintet. If “Finding Solace” was a nice power metal album, this new album is a big, mature step towards heavy/power metal perfection! Paladine’s new effort has a great quality at every level. Firstly, the songs are better, very memorable and catchy, with beautiful melodies that stick with you, colossal riffs and sophisticated solos that will carry you away! Besides that, the song structures and the arrangements are clever, solid and complex – the rhythm section forms a strong, thick basis, on which the guitarists and the singer perform passionately, in a crescendo of power and emotion. Christ Stergianidis, Nick Protonotarios and their bandmates aren’t just delivering the goods; they are making heavy/power metal art, which will mesmerize the heavy metal listener. The band is in a very prolific stage and its interesting, fresh ideas are nicely put into the songs, thanks to Thimios Krikos, who excellently produced this album. To sum up, we have a tremendous, fantastic new album by Paladine, an LP that kicks serious ass and encapsulates the magic, the beauty, the mysteries and the majesty of the heavy/power metal genre. Because Paladine creates epic, ethereal and anthemic music, which comes in terms with the Dragonlance saga-inspired lyrics. “War of the Lance”, “Mighty heart”, “Entering the Abyss” and “Sacrifice of a Hero” are just the pinnacle of this masterpiece! Paladine is here to stay!