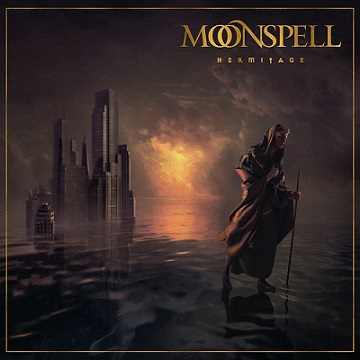 Portuguese gothic metal veterans Moonspell are back and stronger than ever. They have released “Hermitage”, an album with ten tracks, completely sung in English. This release succeeds to 2017’s “1755” that tells the story of an earthquake that devastated the city of Lisbon, in Portugal. But let's talk about the present album, which is what we are for, isn't it? This is the first record, where Hugo Ribeiro (drums) presents us with his skills as a musician, drummer and successor to Miguel Gaspar. The album starts with “The Greater Good”, the first single of presentation, which is an alert of the times we are living in, an “Imagine” of these same times. The introduction is fantastic, made by the guitar of Ricardo Amorim and Pedro Paixão on programming, creating a mystical atmosphere, which holds us. Fernado Ribeiro’s voice is so magical, it makes us pay attention to the message of the song. Aires Pereira’s bass is crazy and Hugo is a worthy successor. Let’s move on to “Common Prayers”. The guitars, together with the bass and drums, create perfection. But the strong point, without a doubt, is the environment created by the keyboards. For those who like more vintage sounds, the atmosphere, interpretation and gothic sound, then without a doubt, "All Or Nothing" is for the same people, as the video suggests it, as well as the music. The self-titled track is more Moonspell-ish. More guitar solos, the voice Fernando got us used to, fast drums, keyboards and bass that match. For me, one of the strongest songs is “The Hermit Saints”. I highlight the choirs, together with Fernando’s voice and the instrumental part. What a beautiful music ... An album is not perfect without an instrumental track; here it is “Solitarian”, which, as the name indicates, we shall enjoy alone in the night and beyond ... "Hermitage" may not be the next "Wolfheart", "Irreligious" or "Night Eternal", but it deserves to be heard and appreciated. It may bring in new listeners, or not, but it's Moonspell, and that's it.