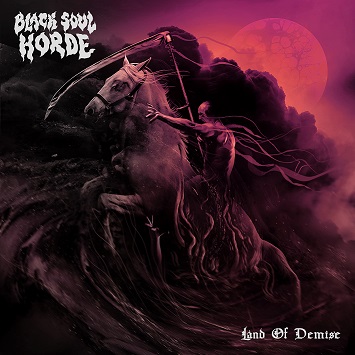 Black Soul Horde is a Greek heavy metal act, which started its career in 2012, when John Tsiakopoulos (guitars) and Jim Kotsis (vocals) decided to form a side project. They released their debut album (“Tales of the Ancient Ones”) in 2013, a split EP with fellow Greek true metallers Dexter Ward in 2015 and after some years of silence, they appeared again in 2020 with their sophomore album (“Land of Demise”). Black Soul Horde returns with its pure, unadulterated, epic heavy metal sound; the band still draws influence from New Wave of British Heavy Metal, european power metal and 80s US metal. The Greeks obviously love iconic heavy metal bands like Iron Maiden, Saxon, Angelwitch, Witchfynde etc., there are times they sound like Helloween, Blind Guardian and Running Wild and their songwriting style resembles the style of Riot, Jag Panzer, Manilla Road, Iced Earth etc. Yet, I personally recognize dark/doom metal elements in Black Soul Horde’s music, I have the opinion that they are inspired by Black Sabbath, Candlemass, Trouble, Count Raven etc. Here you will find sharp, catchy riffs, long, edgy guitar solos, a solid/anvil-like rhythm section with pounding drums and loud bass lines, a strange, Ozzy-like voice with its clever lines, a complex song structure, which focuses on the melodic hooks and a shadowy atmosphere, which unfolds from song to song. If you liked the band’s debut, you will be stunned by its successor. “Land of Demise” is a perfect example of traditional heavy metal, performed by metal fans, for metal fans, destined to be praised and appreciated. It has much inspiration, passion and a mesmerizing ominous feeling; be a little patient and the eight songs of the album will haunt you! Listen to “Land of Demise” and you will soon be damned – for eternity!