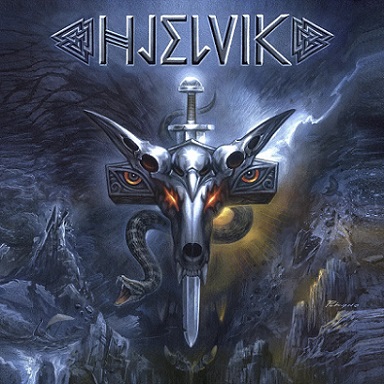 Ex-Kvelertak frontman, Erlend Hjelvik, has started a solo metal band, named just Hjelvik, and gladly he did. His music, like he describes, is 'blackened Viking heavy metal' with lyrics based on Norse mythology and history. He has signed with Nuclear Blast and the record was released on 20th November, 2020. Ten tracks, that will travel you into Norway. This album sounds like a mix of blackened thrash and old-school heavy metal. The first track, “Father War”, is what the listener might expect from it: more traditional melodic heavy guitar riffs, fast drummings and amazing, blackened growls. An appropriate track, to introduce this record. “Thor’s Hammer” starts with a fast guitar riff, that reminds me of classic heavy metal melodies. It continues to show how much effort Erlend Hjelvik puts on the songwriting. Nice, with great solos, which give an airy feel, like you are a true Viking on war. I think that the highest point on the record is the ballad, “The Power Ballad Of Freyr” - this isn’t a typical one, like slow tempos, gentle guitar whips and a crying voice. No! This brings intensity and continues to deliver power to its fullest, without forgetting the fast melodies. If you love the 80’s vibe, that includes an ‘Iron Maiden’ atmosphere and twin guitars, slightly reminiscent of “Hallowed Be Thy Name”, then “Necromance” is for you, very positive, fun and makes you want to headbang. The voice is very powerful. Overall, for a debut album, “Welcome to Hel” is an original, creative, and impressive debut effort with an edgy, raw, and underground feel to it. Once concerts are allowed, you shall not miss this one.