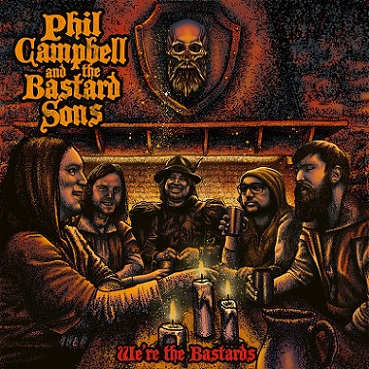 Phil Campbell does not need any special introductions or prologues. He’s been part of the legendary Motörhead for several decades and that be default says it almost all about the man and what he has contributed so far. His Bastard Sons continue rock n’ rolling in their own way, and this is a dirty, in-your-face album which does not ‘re-invent the wheel’, there is no need to do so, but, delivers pure hard rock tunes and makes the fan enjoy the music to its purest form. The guitarist of Motörhead and companion of the one and only Lemmy refuses to retire and we should thank him for that. Making inspired, groovy, high energy rock n roll albums is his job, no matter the criticism he has received over the years. The Welshman has got the riffs and speaks directly to your soul and heart with this bluesy, dirty hard rock album. This is a family effort, keeping the Welsh flag high and the beer bottles too! THIS family is “Born to Roam”. I like the flowing energy on this record, the groove, the melodic vocals and the solid/compact setup of the sound, everything sounds very convincing, very prevailing. Look for no fillers here, as the album’s 13 tracks are one by one fun to listen to, loud and clear. Every single one of the songs contribute on its own way to the crunchy, rocking and old-school feeling of the album but with a modern and new flair on the sound of the vocals and all instruments, no exceptions. Phil plays ball in his old, well known grounds, and does what he does best, but this has no effect on the attitude and the music he delivers to the audience. We’re talking about straight forward rock n’ roll, back from the base, back from the basics, straight from the roots. Hope you enjoy it!