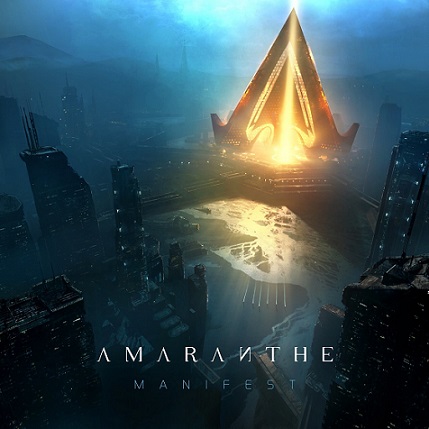 When you think about Norse countries, you think about Vikings and also, good metal. Sweden is one of those countries, that has one of the best bands ever. This time, I’m talking about Amaranthe and their new record: “Manifest” and it’s their sixth album, released on October 2nd, via Nuclear Blast. Everytime I hear their name, I get excited, because I know that they will deliver quality music, and they did it. The perfect blend of the three vocalists is a huge key to their success, the sugar and spice of clean singing from Elize Ryd and Nils Molin with Henrik Englund Wilhemsson’s guttural roars provide an ear catching sound. Founding member Olof Mörck on guitar and the rhythm section of Morten Løwe Sørensen on drums and bass from Johan Andreassen are no slouches either and take absolutely no prisoners as they bring the musical thunder and curves under the trio of singers. “Fearless” kicks things off in suitably epic style, an adrenaline rush of tight, fast riffing as the irresistible hooks and breaks erupt like a pyromaniac let loose in a fireworks factory, and so it goes. Track after track is pure perfection. “Scream My Name” blends so well into elements of pop and R&B. “Going Viral” is very pop. We can hear the beautiful voice of Elize, Nils Molin’s powerful voice and Henrik Englund Wilhelmsson’s gruff delivery is rich and powerful. Henrik Englund Wilhelmsson is a beast, but in a good way. I’m talking about “BOOM!1”. This track is the last thing you’d expect from a band synonymous with pristinely polished metalcore and power metal crossovers, but somehow, it just works. Harsh vocalist Henrik Englund Wilhelmsson even breaks into some high-speed rapping, influenced by the likes of Eminem and Yelawolf, turning the whole track into a technical tour-de-force. For me, this is my favorite. This band, after touring with fellow friends, Sabaton and Apocalyptica, on “ The Great Tour”, have shown they will conquer the world on their own path and hope this pandemic will end to see them. I garantee you’ll enjoy.