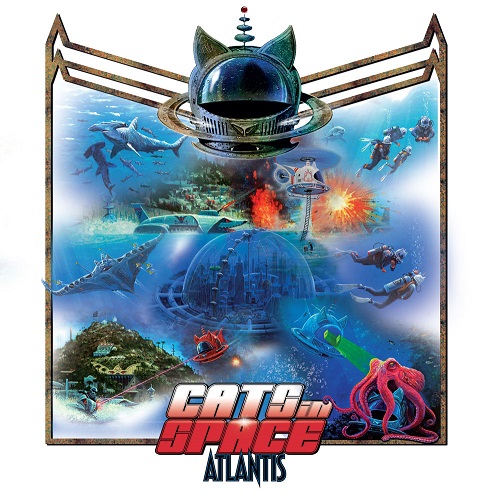 Cats in Space had been a promising newcomer band with its debut album (“Too Many Gods”, 2015) and a well-established pomp rock band thanks to its next two albums, but never earned the big success they deserved so much. Even the fans of epic, dramatic, ethereal hard rock aren’t familiar with Cats in Space and the band’s first-rate music. Nevertheless, it’s time for this injustice to stop. Because Cats in Space return with a great new album, titled “Atlantis”, a new album that has all the potential to make Cats in Space famous – at least the fans of pomp rock will probably learn their name for good! “Atlantis”, just like the previous albums of the band, is ideal for the ones who like the pomp rock groups of the seventies, it’s ideal for fans of Electric Light Orchestra, Queen, Styx, City Boy, Eagles, Boston, Uriah Heep, 10cc, Journey and many many others! Yes, if that’s your favorite style of music, you will absolutely love Cats in Space and all their albums, including the “Atlantis” album of course! For another time, Cats in Space are very much inspired and their tons of fresh composing ideas have been turned into killer songs. The band members’ extraordinary, passionate, emotive performances will take your breath away, every song seems like a dreamy venture and “Atlantis” has this magical, romantic feeling/vibe that will surely impress you! With the clear sound of the unmistakable production, the addition of the amazing voice of Damien Edwards and all the Cats in Space trademarks (sharp and heavy guitars, solid and compact rhythm section, multi-layered vocals and well-crafted harmonies, astonishing keyboards and pianos and of course, the clever use of the orchestra), “Atlantis” will definitely cause a stir. I am surely that if Jeff Lynne listened to the album, he would be flattered! To sum up, Cats in Space’s “Atlantis” is the album that all the 70s classic rock enthusiasts have been waiting for! Heavy, melodic and grandiose, this album’s the proof that good music still comes from UK!