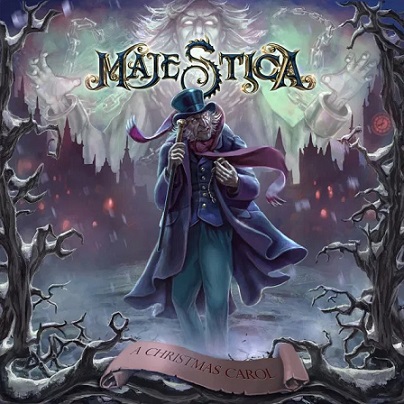 2020 has been an awful year in every way possible, from January until December. But fear no more. Tis the season of joy and carols. Swedish power metal band, Majestica just came here to save us. There are albums that are way too perfect to be reviewed. And in this case, “A Christmas Carol” is that one. Why you ask? First, it’s based on Charles Dickens‘classic and was released on December 4th, 2020, through Nuclear Blast Records. You don’t know the story? The novel tells the story of Ebenezer Scrooge, an elderly pinchpenny who is visited by the ghost of his former business partner Jacob Marley and the spirits of Christmas Past, Present, and Yet To Come. He is shown the error of his ways by these ghosts and they confront him with his future. After their visits, Scrooge changed his ways and transformed into a kinder, gentler man. Second, it was a dream Tommy Johansson said he had and we like it a lot, because he, Chris David, Alex Oriz and Joel Kollberg have created a new genre: power metal musical. Singer Tommy Johansson transforms into Scrooge and sings from his perspective, while other bandmates crawl into the skin of other characters in this story – all four members share lead vocals on this album. It turns out that Johansson is not the only one blessed with a golden set of lungs and vocal cords. Altogether, perhaps the best part of this album is the vocal deliveries, the dialogues, the guest performances, choirs, voice-overs. Beautiful orchestrations and atmosphere are accompanied by sleigh-bells, glockenspiel, and many more instruments that have that sense of Christmas spirit. What is brilliant is that they’ve created their own style into power metal riffs, not to mention the Christmas melodies. “A Christmas Carol” is the perfect song to open this record. All the songs are perfect and, like Alex said on their live streaming, this album is “majepic”, “bombastic”. Words are not enough for this album. All I have to say is: BUY IT, LISTEN TO IT, STREAM IT.