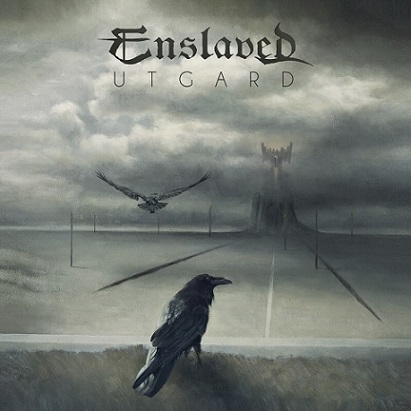 How can a humble fan define Enslaved? How can he describe in simple words their unparalleled creativity, inconceivable inspiration and uncanny defiance of music boundaries? That’s a difficult task indeed! I assume that I cannot transmit but only a small part of the band’s essence and aura. You see, their creations are something more than pure music: they are emotions, philosophy, a whole endoscopic experience.

Their journey over the years took twists and turns that few suspected beforehand. A long catalogue of 14 albums, each one with its own distinctive evolutionary features, contains many hidden gems, waiting for the dedicated fan’s thorough study. And now, for 15th time, they show themselves again with “Utgard”, arising from the Norwegian pagan past, bringing in our times their ancestors’ myths and philosophical concepts. According to Norse mythology, Utgard is the home of Jotuns, the nature spirits that oppose Aesir and Vanir. Their homeland is one of the nine worlds, representing the unknown, a place where conventional rules have no effect. Enslaved adapt their musical approach accordingly; lyrical concepts and music were always highly correlated for the Norwegians.

As such, the foundation of “Utgard” differs compared to “E”, being undeniably darker. However, the darkness it unfolds is not evil. On the contrary, it conceals mysteries of an ancient past, where the light of knowledge should be shed. Enslaved bring to the foreground again their harsh, black metal side. The Bathoric pagan/heroic feeling is evident, but their music is not overtly raw. The prog element is still present, referring directly to the psychedelic/kraut scene of the 70s, but without the prevailing role it had in “E" or in “In Times". Here, it embraces the dominance of darkness, without setting the rules. Of course, experimentations do happen and transform the ideas, without being much daring though; you will not hear saxophones in “Utgard".

They even dare to give more space to clean vocals, engaging them in that whimsical interchange with Grutle's harsh lines. We were aware of Vinje’s contribution in previous albums, but now Sandoy, the new drummer, participates as well. Several remarkable “dialogues” provide a well-known, warmer tone in many tracks. Clean vocals become the protagonist in “Distant Seasons"; they are not afraid of closing the album with a track that would accompany the typical English custom of tea consumption in evening hours. Exactly! Back then, when Syd Barrett's psychotropic journeys began.

From the riveting Norwegian chants when “Fires in the Dark" opens, to the comforting ending of “Distant Seasons”, the band reveal their legacy of many intriguing faces. Aggressive riffage, representative of the early era, provide familiar rawness, in perfect harmony with the more technical, progressive aspect. Riffing themes emerge directly from “Below the Lights": you adore their majesty and your mind floats directly to that great cornerstone. Indeed, the main pattern of the masterpiece called “Sequence" sends you back then, but the second trippy part transfers you to another space-time dimension. The darkness of “Jettegryta" and “Homebound" is irresistible: excellency in black/viking metal and soaring creativity in technicalities, form a cohesive bound, a gripping peculiar totality of paganism and inner beauty. The synthwave, post-punk intro of “Urjotun” makes a striking antithesis to the more “conventional” material, but they encompass it with ease. As for “Flight of Thought and Memory”, it might be considered as classical and representative of their current era: oddly familiar, through the co-existence of black and prog art, virtuosic leads and psychedelic essence.

“Utgard” is impressive, not only due to its undeniable quality. Above all, what’s really worth mentioning is the band’s inspiration: a mechanism that remains fruitful, even after 30 years. In “Utgard”, they revisit their black metal aspect, though referring fluently to elements that made them unique in later periods. In that sense, the album is a cosmic dark journey towards myths and spirituality; a journey to “Deep down below; under the sea of thoughts”, as it’s commended in the short recitation of “Urtgardr”. We have another manifestation of art, philosophy and tradition. Enslaved’s grandeur is incredible!