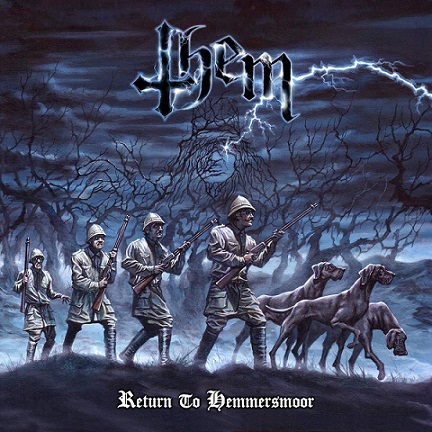 German-American act Them presents the third and final part of the trilogy that began in 2016, with “Sweet Hollow”, and continued in 2018, with “Manor Of The Se7en Gables”. Once again, thrash metal meets horror/fantasy in an incredible way. Although the vocalist’s makeup is more elaborate than King Diamond, his outfit is notably heavier and more riffcentric than its object of emulation. “Diluvium” is an introduction to what will happen in this record ... the suspense and my curiousity are increased, as I want to know badly what will happen in this journey. Blasts, heavy and fast riffs by Markus Johansson and Markus Ullrich, alongside KK Fossor’s theatrical and mysterious voice, are the highest points in “Age Of Ascension”. One of the heaviest songs of the album. “The Tumultous Voyage” starts in a witchy way. Who could do that? None other than Richie Seibel with his keyboards, who creates a trip that could go wrong. Or maybe not! The shredding and the solos are awesome here too! “Free” has the most memorable chorus hook of anything occuring on here, with a more melodic context. “Field Of Immortality” seems like a song by Symphony X, digging into a more power/pogressive territory. Likewise, the shred-happy guitar devices that weave in and out of the dark thrashing madness of “Waken” often veers into the progressive territory. If you like a King Diamond vibe, listen to “The Thin Veil”. “Battle Blood” is the single, that comes with a video, and the keyboards, alongside with the vocals, drums, bass and guitars, make great melodies. It is indeed the last chapter and the last time we will ever hear about these characters. King Diamond? Are you sure you didn’t write this song and the dialogue? If not, he could do it. “Maestro’s Last Stand” is a twisted tale by a thrashing extravaganza with heavy operatic elements. What better way to finish this album, than with “Finis”? This album has all the elements that a person is looking for in an unique twist of music in the past. It blends dark thrashing elements, that are often heard on recent metalcore and progressive bands in the present, that were used in the past. It provides a bridge between ongoing thrash and heavy metal, that was great almost forty years ago and the bands nowadays pay tribute to them. This band is an example of what I’m talking about. If you like King Diamond and bands that combine these kind of elements, have a listen! By the way, the album was released one day before Halloween!