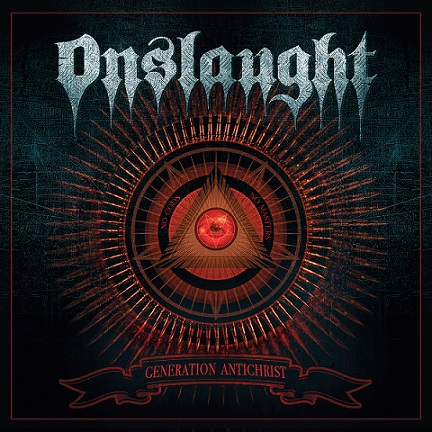 I hadn’t realized that seven years passed without a new Onslaught album, since after the release of “VI”, the band engaged mainly in touring. Some members left, while Sy Keeler’s recent departure (the long-standing and iconic frontman) brought concern among fans. Onslaught had already parted ways with their roots, as in their second era they deviated from the raw, unprocessed and rather dark sound of the early days, abolishing their cult status. Indeed, from “Killing Peace” onwards, their thrash is modern and closely related to the American standards, satisfying fans who prefer a more up-to-date and groovy approach.

The three albums that they released under their new influences, no matter how dynamic, aggressive and well-produced they were, didn’t draw my attention for a long time. They offer pure thrash amusement and in no way do I imply that they are bad albums. However, they didn’t have an element that would make them distinguishable among countless releases and leave a mark in the audience’s minds. Therefore, I was curious to ascertain whether “Generation Antichrist” would make a difference in this respect, given that the band is in a transition period, with David Garnett being the new singer.

In their seventh album, Onslaught insist on the Americanized concept, offering the familiar sound of bands like Exodus and Testament, with selective doses of Slayer; that means up-tempo rhythms and grooves and further escalation of ferocity and aggression. But this time their ideas become more mature and cohesive. Of course, the influences remain evident and they don’t try to hide them. However, songwriting is improved, involving more appealing patterns that don’t allow the listener to distract. Rockett seems to be in a composing effusion, offering riffage straight out of hell and Perry’s drumming is raging and precise. Above all, the band wins the bet of the new frontman: Garnett, with his harsh tone and wild attitude, proves from the first moments that he’s a perfect replacement for his great predecessor, giving the impression that he’s a long-time band member.

From the opening song and throughout the album, Onslaught press the gas pedal, with the exception of few occasions (e.g. Empires Fall) and timely placed breakdowns. Several tracks could be labeled as “thrash dynamites” (“Strike Fast Strike Hard”, “Generation Antichrist”, “Religiousuicide”), where fierce patterns offer lavishly intensity and aggression, elements deemed as necessary for an album of that kind. On the other hand, in “Bow Down to the Clowns” and “Empires Fall” they restrict their horsepower, emphasizing on a more groovy, crushingly heavy and cement-like sound.

Evidently, the band follows the path that they defined in previous records. However, towards the end, there is a small surprise for the fans. “Religiousuicide” has an old school, wild attitude, reminding of early thrash days, and if you search for some dirt, “A Perfect Day to Die” is suitable for you: with its peculiar bass intro and overall punkish aura, it reminds of good old Motorhead, though under a modern perspective. I appreciated that old, punk, thrash ‘n’ roll mixture that the band reserved for us in the end. That was a clever linkage to their evil beginning.

Certainly, in 2020 Onslaught provide the modern thrash perspective that many of you want to hear, restoring themselves emphatically to the thrash scenery. “Generation Antichrist” may not be highly innovative (we don’t have a demand of that kind anyway), but it impresses with its unleashed power and violent themes. All these years of discographic inactivity seem to have benefited the band in the end, since Onslaught returned with ferocity and determination to offer something better. Indeed, that might be the best album of their second era.