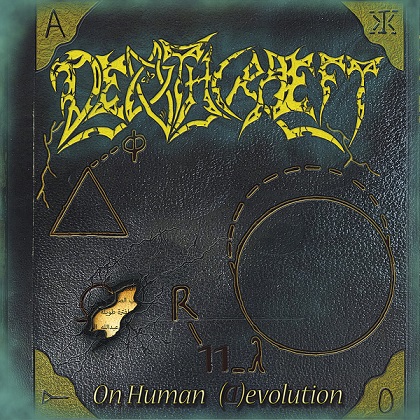 Most Greek fans have high appreciation of domestic bands. However, I should make this comment vice versa, as the mechanism works in the opposite way: actually, the domestic bands have made us, the Greek fans, to appreciate them deeply. During all these years, our extreme scene remains active and prolific. Old bands still go on, showing the way, while new ones emerge occasionally to attract our ears. The matter I talk about doesn’t concern the term “quantity” solely. “Quality” comes first, regarding composing ability, production issues and professionalism in general. Indeed, there are many bands of high quality standards in Greece and I always declare that they don’t necessarily have to look for best practices in other countries. Luckily, many friends of mine have the same opinion.

Today, I write about a new, promising entry. Deathcraeft is a death/thrash metal band from Ioannina, a small town of Northwestern Greece. The band was formed three years ago by guitarist and studio owner Kostas Kalampokas, as a personal project. Kostas composed and recorded the band’s first album, “On Human Devolution”, in his own studio, with the help of Nikonas Tsolakos on vocals and Giannis Chionidis on drums.

Deathcraeft’s fundamental pillar arises from death metal territories: this is their essence and core value. The compositions have a multilevel structure, revealing a noteworthy technical expertise. That’s certainly an influence from bands with a rather progish approach. However, Kostas has put his own “signature”, enriching his music with elements of black, thrash and symphonic metal, to create something more ambitious and dark. Indeed, “On Human Devolution” has a rather blackened essence, creating an atmosphere that serves perfectly its lyrical content, which is Lovecraft’s Cthulhu mythos; but the Great Old Ones are only a pretext for the true purpose of this concept album, which is Kostas’ concern about humanity’s self-destructive nature.

Throughout the album, we hear different musical themes in the same track. Aggressive, intense death patterns are combined with more melodic/atmospheric parts, forming a multifaceted structure with numerous tempo changes that grips our attention. Riffing is well-crafted and appealing: either straightforward and abyssal or more technical occasionally, it indicates that Kostas spent countless hours on composing and improving his ideas. Solos intervene where necessary, while tons of blast beats and drumming patterns that require precision and timely execution support every track. Overall, there is evidence of skillful musicians here.

What excel most in Deathcraeft’s debut are the vocal patterns. Kostas derives the (seemingly) maximum performance from Nikonas, who’s using different styles of growls within the same song. Traditional, intense death growls, more high-pitched parts and even clean vocals, indicate the wide range and capabilities of the band’s singer. It’s impressive how vocals change in different musical themes. I admit that several times I caught myself paying more attention to the vocals’ diversity rather than the composing features. I hope that Nikonas will remain a member of the band.

The use of symphonic parts is selective and timely, making compositions sounding more epic, impressive and immersive (Septicflesh unavoidably come in mind). Kostas succeeds in avoiding the trap of relying extensively on keys, since their omnipresence would probably alter the band’s identity. That wouldn’t be the best outcome, given that Deathcraeft make their very first steps, where it would be wise for them to reveal their true nature.

The band’s intentions become evident from the first moments of the opening track. “The Ritual”, with its dark, mysterious, foreboding intro and intense rhythmic theme, creates an atmosphere of exocosmic terror. A structure that involves violent and atmospheric parts that succeed each other, interchanging tempos and gripping solos cannot dissatisfy. The abyssal, extremely aggressive “Spreading Lies”, with vocals that reach the upmost level of intensity climax, will affect many necks. On the contrary, “Survival” and “Daydreaming in the Abyss” are heavier, slower and rather doomy; the former is more complicated, causing addiction due to its unexpected changes and technicalities. The closing “Free into the Void” brings again in the foreground fast-paced themes, starting with a more thrashy orientation and featuring a variety of technical riffs. It ends brilliantly with an epic, symphonic part, succeeded by the same guitar pattern that opens the “Ritual”. Thus, the album is somehow a conceptual circle.

“On Human Devolution” is not an easy listening, requiring open-mindedness and careful consideration. Given that it’s self-produced, it impresses with its pluralism, dynamism and excellent sound quality. Deathcraeft’s ability to combine countless patterns without being tiring or flamboyant is surely a crucial benefit. We eagerly wait for their next effort, which will be pivotal regarding the direction they wish to follow. In the meantime, we salute Kostas and welcome him to the scene.