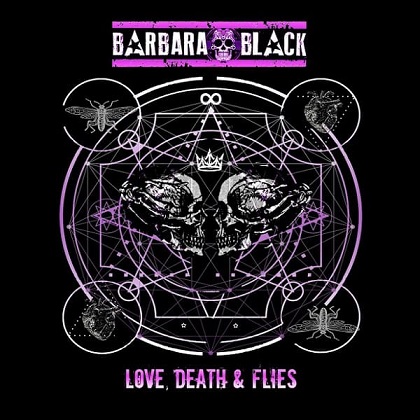 Who is Barbara Black? Well, you will understand who she is, only if you listen to the “Love, Death & Flies” album. Spanish artist Barbara Black has just released her third album, with which she introduces herself to the worldwide rock/metal audience. Having listened many times to this studio release I can say that Barbara Black isn’t the typical singer of a hard n’ heavy band - she is a wild cat, a crazy tiger, who is roaring, ready to attack you! She is a dangerous animal, which has just broken the chains and left the cage! Barbara Black is singing like there is no tomorrow, her sometimes clean, sometimes brutal vocals will leave you speechless and there is no end in her artistic crescendo! That’s because Barbara Black, apart from a singing genius, is a great rock n’ roll persona, a true lady of metal, a hard rockin’ bitch, who won’t stop, if she doesn’t win the game! In the context of inspired, awesome songs (“Damnified”, “Desert’s Last Drop”, “Kissed by Flames” and “Don’t Play with Fire” are my favorite, although every song is a killer!), Barbara shows to every one of us that she is a metal queen, a dark diva, who does whatever she wants with her voice and her style! There are no clichés, no taboos, no borders in “Love, Death & Flies”, which has a plethora of music elements, apart from the hard rock/heavy metal core: southern rock, country, blues, even opera and extreme metal! Barbara Black introduces herself with this album to the wide audience. The question is – are you ready for Barbara Black?