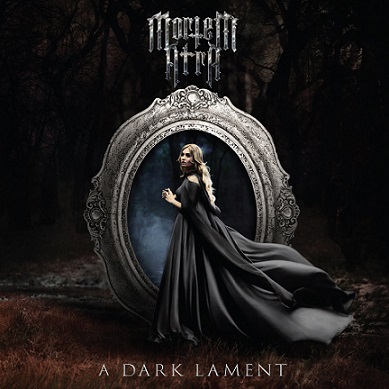 Mortem Atra, a melodic doom/death metal band from Limassol, Cyprus, is a peculiar example of dedication and decisiveness. Though they formed in 2011, they didn’t release anything (exempting a 3-track demo) until the end of 2019, when their debut, “A Dark Lament”, became available via Pitch Black Records. This long term delay was due to their first drummer’s passing away and some line-up changes that hold things back.

Despite the unfortunate and deterring conditions they underwent, Mortem Atra reached their goal to realize their musical vision through a debut album. In that sense, we have to commend them for overcoming all obstacles, and especially Takis Gorestoned (vocals), as he is the main songwriter and lyricist of the band.

Regarding “A Dark Lament”, it sounds as its name implies, dealing with internal struggles: it’s dark and melancholic, creating a gloomy beauty and nostalgia for something lost, forgotten or fallen behind. I regard the extensive use of keyboards as the main element of Mortem Atra’s darkness: Christina’s keys are omnipresent, tying everything up and making compositions more theatrical and imperceptibly romantic in some occasions.

The Cypriots have spent a lot of effort in vocal patterns, another crucial parameter of the band’s aura. Takis’ growls contribute to the overall gloomy atmosphere and collaborate effectively with Christina’s ethereal, more sentimental parts, thus making noteworthy and pleasant contrasts. At first, you might think that harsh vocals are a bit stale. However, more interesting things happen in the second part of the album, where Takis becomes more expressive and uses clean vocals as well, giving to the tracks a glimpse of Therion’s music.

Along with keys, female vocals transform the whole essence of the tracks, inducing the aforementioned melancholy. Christina’s presence is restricted to four tracks only, as the structure of certain songs is not appropriate for her. Among these, she has the leading role in the intimately dark “Mirror”, a very sentimental ballad with gothic influences (it’s exclusively her composition and probably the highlight of the album). “The Puppet” is easily distinguishable as well, featuring a warm keys melody that resembles a child’s music box. Intense, dynamic riffing patterns and harsh growls are combined with silky, memorable female vocals, drifting the audience to a dreary atmosphere.

A melodic, appealing duet takes place at the first part of “Harmful Obsession”, a track that depicts the band’s ability to incorporate heavy, rhythmic riffage that leads to a crushing ending and noteworthy use of growls and clean vocals. Further Mortem Atra’s aspects appear in “Hymn of Doom”, a song that justifies its title with its slow, doom attitude, enriched with a well-crafted solo, while “Evil Rise” features sick grooves shifting to a dark, sinister, instrumental part in the second half of the song. Also, “In Superstitious Breath” has a different feeling compared to previous songs, due to its Eastern-like melody and clean vocals; however, intensity takes place towards the end.

In “A Dark Lament” Mortem Atra features the well-known elements of melodic death metal, along with gothic and doom influences (chugging guitars, sentimental melodies, transitions from growls to clean vocals) and succeed in creating an emotionally driven and beautifully dark record (needless to say, the album cover is absolutely compatible with the band’s music). Hence, I deem the band’s effort as successful, since it lulls you into the feelings it’s supposed to do.

Mortem Atra seem to have potential, releasing a more than satisfying album. Next time, we expect even better songwriting and more intriguing vocal patterns, since there is fertile ground for further exploration (as a personal preference, I hope that Christina will have more “space” next time). Let’s hope that the band will stay creative with new ideas and we’ll experience their new effort soon.