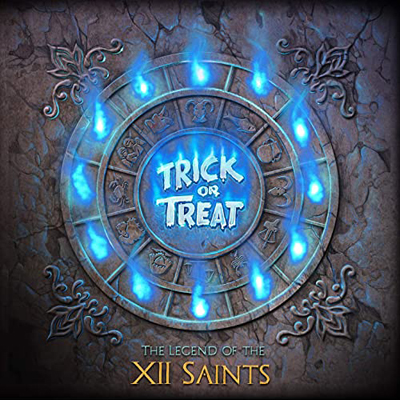 Almost a year ago Trick or Treat released singles on the theme of the zodiac, each single corresponded with the sign of the month it was released in. All twelve songs were finally gathered on the album “The Legend of the XII Saints”. This is the sixth album for the Italian power metallers, who started their carrier as a Helloween tribute band. The entire album is dedicated to the “Keepers” period, but I didn’t feel they are just another one Helloween copy - on the contrary, they use with respect all the music elements that characterize Helloween and produce nice music, indeed. As far as the composition of the songs is concerned, it’s very interesting you do not find the same pattern among them, therefore you don’t get bored. I find their singer Alessandro Conti exceptional, because he delivers an amazing performance with many variations and alternations in his voice. Surely, his singing is quite reminiscent of the way Michael Kiske sings, but it is something not annoying. I also liked the guitarists Guido Benedetti and Luca Venturelli - their guitars are talkative, but the listener won’t get tired, since they deliver us great solos and riffs. The production of the album is very clean to the point that you hear every detail – for example, you can listen clearly to the bass lines of Leone Villani Conti. I will not fail to mention the dynamic way that Luca Setti plays the drums, giving great impetus and energy to the album. Faithful to the tradition of hosting other singers and musicians on their records, we have the excellent Yannis Papadopoulos (Beast in Black) in the “Gemini” song. Once again, Fabio Dessi, a reliable partner of the band, is involved in the choirs and the narration. Also important is the participation of another excellent collaborator: Alessio Lucatti on the keyboards. Finally, a pleasant note is the participation of Lucia La Rezza in the violin on the “Libra” song, I really enjoy her in the best song of the album, in my personal opinion. Those who love Helloween of the “Keepers” period will enjoy this album, Trick or Treat represent the typical European power metal genre, combined with characteristics of the Italian power metal scene, for example some Rhapsody of Fire choirs, refrains and solos/riffs. In most of the songs you will feel the energy and speed of their music.