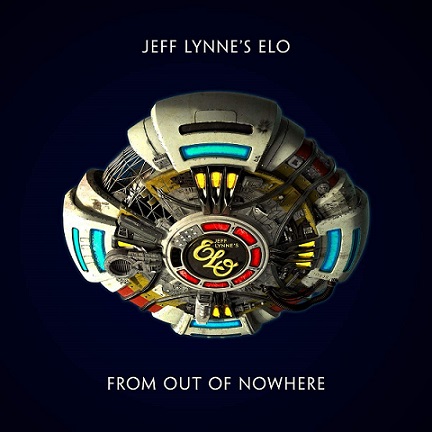 Even in my wildest ELO dreams I didn’t expect that Jeff Lynne would return back with his orchestra for good. Since 2015, Jeff Lynne’s ELO has released two studio albums, one live CD/DVD, Jeff Lynne has played many special concerts and embarked on an absolutely successful European/North American tour. Fortunately, Electric Light Orchestra, a super band of the 70s, has gone from … old-fashioned to … popular, filling arenas like Webley Stadium (London, UK) and Mercedes-Benz Arena (Berlin, Germany).

“Alone in the Universe” was a great album, a sensational, touching record with all the typical, magical ELO characteristics. After this release (and the live show of my life!), I was so satisfied that I didn’t expect something else from Mr. Lynne and co., - you see, Lynne had given us everything, musically speaking. Yet, I experienced the total rock n’ roll fantasy, some months ago, when the latest Jeff Lynne’s ELO album was released.

“From Out Of Nowhere” came to us, like another heavenly gift from Mr. Blue Sky. Out of the blue, the ELO spaceship landed on Earth, we found another lost treasure in the palace, we lived another new world record and it was the right time to face the music … again.

It’s obvious that Jeff Lynne is inspired and has things to say, artistic-wise. But is that really happening or is Jeff Lynne releasing albums for … nostalgic reasons, like so many other artists of the 70s are doing nowadays? Well, Jeff Lynne doesn’t need any nostalgia, doesn’t need a “life vest” so that he stays on the music business surface. He is so creative and ambitious, and leaves us in awe. His new masterpiece, under the Jeff Lynne’s ELO moniker, is here, waiting for us to discover it. Of course, I have heard the album since day one, since it was released in November 2019, - the new album still is in my player, that’s where it belongs, not on a dusty shelf. The reason is simple, my fellow listeners. “From Out Of Nowhere” contains only amazing songs, precious jewels of rock n’ roll mastery, priceless gems of charming musicianship. Ten songs of strange magic, ten songs of sweet talking music, all the new songs are impressively good, and deliver the ELO legacy of the 70s, the 80s and the 90s to the 21st century man. All instruments are played by Jeff Lynne, apart from some percussion in “All my Love” by engineer Steve Jay and the piano solo in “One More Time” by the one and only keyboard wizard Richard Tandy! I see that “All music and lyrics by Jeff Lynne” and tears come from my eyes. But, let’s examine the songs, one by one!

1) “From Out Of Nowhere”: A fantastic opening track, this song features a gentle guitar work and elegant keyboards, whereas Lynne’s multi-layered vocals come straight from the 70s, giving their dreamy touch. It’s a song that could be a part of the “Secret Messages” album, a song that will let you fly and start anew – the piano towards the end of the song reminded me the first ELO days!

2) “Help Youreslf”: This song stands where the “Zoom” album meets the “Armchair Theatre” Jeff Lynne solo album, and a lot more things than that. It’s a wonderful composition, with a sweet electric guitar sound, a groovy rhythm section, beautiful keyboards and a bold vocal performance – emotionally priceless, the musical/lyrical content of “Help Yourself” will lift you up!  What a nice guitar solo around the middle of the song!

3) “All my Love”: A laid-back, relaxed song with a catchy little guitar riff and warm percussion, it gets to the next (highest!) level due to Lynne’s ingenious vocal puzzle. It may sound simple, at first, however, after some serious listening sessions, you will understand how rich, how dense this song is. I love its slight melodic changes, I sing along to its refrain. Push play, again and again, this is the sunny day song of the album, ideal for all four seasons of the year!

4) Down Came the Rain: Another rain song from Jeff Lynne’s ELO, this time a melodic rocker, which pleases with the nice guitar riff and the mellow vocal melodies. Lynne’s performance is again extraordinary, in a song reminiscent of Lynne’s 90s/00s other artist productions – no surprise if it was included in a Tom Petty album. Nevertheless, everything, from the backing vocals to the drum breaks, is ELO-esque – at a certain point I thought I was listening to “Sweet Talkin’ Woman”!

5) Losing You: This song comes straight from the mid-70s, it could be in the “Face the Music” album and could be described as a bluesy version of “Shangri-La”! It’s a dreamy ELO elegy, a majestic composition, which has all the important ELO elements, an excellent tribute to Lynne’s 50s music icons, a clever piece of art that talks straight to the heart. Listen to the keyboard strings, which enrichen the amazing result!

6) “One More Time”: Fasten your seat belts, because the ELO spaceship is taking off! What a heavy rocking tune is that! Jeff Lynne’s ELO rocks big time, kicks out the jams and we have a little diamond for … one more time! Lynne/Tandy make us the most beautiful present, in the tradition of “Hold On Tight” and “Rock n’ Roll is King”! This is true rock n’ roll, my friends, because Jeff Lynne knows how to rock and how to roll. I dig this song so much!

7) “Sci-fi Woman”: Jeff Lynne takes us on an adventurous journey to the 70s, on the wings of another rocking song. In “Sci-Fi Woman” a guitar web has been woven by Lynne, who sings with confidence his smart vocal melodies. The bittersweet feeling of the song balances perfectly with the rock n’ roll vibe and Jeff Lynne’s ELO has got now one more rocker for its marvelous live shows.

8) “Goin’ Out On Me”: That’s beauty in music! That’s fresh inspiration! Jeff Lynne is paying his tribute to 50s rock n’ roll and all the music legends he grew up with, delivering us a fabulous tune, wonderfully arranged and amazingly performed! Listen to the track, travel back to past, then return to the present, with remarkable memories/impressions/feelings! Only Jeff Lynne can focus on his influences and come up with something new, mature and personal! Incredible!

9) “Time of Our Life”: In my opinion, this is the best song that Jeff Lynne has come up for years. It is a homage to us, all ELO fans, who spent a night (or more!) with Jeff lynne and together had the time of our life. I am so positively shocked with this tune, this AOR anthem, which bears all the elements of the legendary ELO sound. Where should I focus on? Τhe cheerful melodies? The refrains? The nice guitar phrases (riff/solo)? Jeff Lynne is performing like there is no tomorrow and we are dancing like never before! It is the time of our life! It is the song of our life!

10) “Songbird”:  Our songbird came home, as Jeff Lynne is singing - again - about a bird. This is the best ending of a triumphant album, a ballad for all of us, with its slow tempo, its warm guitar, its vocal magic. We have here the ELO blues, the Birmingham blues, forever and ever. Thank you, Mr. Lynne!

Jeff Lynne’s ELO’s latest album, “From Out of Nowhere” is pure gold. A soulful album for the ones who know, a surprise for the ones who are willing to know. Jeff Lynne’s victorious return is still a go and we are enjoying every moment of it. Oh God, the orchestra still plays!