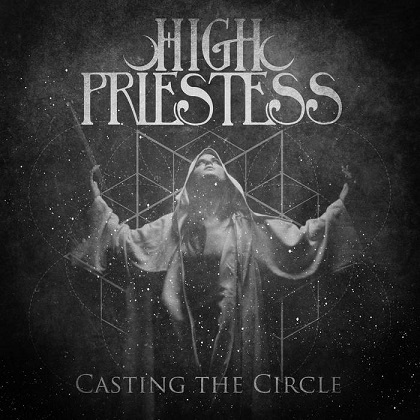 Four years ago, High Priestess, the all-female psych-doom trio from LA, came into existence, entering the hazy realms of ritualistic psychedelia, prog spaciousness and hypnotic doom vibrations. Mariana Fiel (bass, vocals), Katie Gilchrest (guitars, vocals) and Megan Mullins (drums) caught us unaware with their initial demo release one year later, which became their official debut in 2018. “High Priestess” thrilled us instantly with its aura of Eastern mysticism, meditative essence, desert-like heavy sound and spacey atmosphere. I was curious to find out whether this high-quality release would lead to a stagnation of ideas, or to new, previously unexplored territories.

In “Casting the Circle” the girls use the elements of their debut (Om’s path towards more heaviness) to expand their vision: their music becomes more esoteric and ritualistic, intending to delve into the human soul, our dark inner self. That’s what the album is about: the human nature. High Priestess fulfill their purpose through the means that introduced us in the first release: psychedelic riffing patterns, ethereal choral vocals, strong occasional grooves. However, the more meditative attitude of “Casting the Circle” required a significant change: the band’s sound is not that dirty, becoming rather smoky.

The opening homonym track depicts clearly the band’s intention. A simple, ritualistic tribal percussion is the foundation upon which hymnic vocals and riffs coming out of an oriental religious ceremony are combined, to create a foggy universe, from which we do not wish to escape. “Casting the Circle” is unearthly, a mystical room of candles and burned fragrances that repeals reality.

High Priestess balance skillfully between psychedelia and doom in “Erebus”. As its title implies, it’s dark, full of crushing grooves, enriched by lengthy, elegy vocals and lead patterns of past decades. The sound is warm, bringing in mind bands like Windhand. “The Hourglass”, from the very first second, “stinks” prog psychedelia (many bands would feel jealous of the leads). Vocals become more expressive, more intense and multi-faceted through Mariana’s and Katie’s harmonic collaboration, opening a door to another dimension.

A 17-minute track like “Invocation” might entail several traps that would cause boredom and eventually degrade overall quality. Initially, the band introduces an idea that evolves from simplicity to complexity, gaining gradually in intensity and variety. However, a sudden doom outburst occurs at the middle that brings in mind the straightforward approach of The Wounded Kings. The “dialogue” between Mariana’s vocals and guitar patterns entangles us in the invoking atmosphere, while the solid bassline, supported by the organ at the background, indicates that High Priestess are now included among the heaviest bands out there. Definitely, they prove their ability to handle the challenge of a lengthy composition, avoiding all obstacles.

The album reaches to its end. “Ave Satanas” is a delicate, echoic choir that liberates the soul after the nightmarish heaviness of “Invocation”. The inner self is found; we embrace it and deal with it, bringing it to the surface. That’s the very essence of “Casting the Circle”: introspection towards redemption.

High Priestess impress, offering an immense hallucinogenic, psychotropic mushroom. “Casting the Circle” is hypnotic, uplifting, invigorating, splendidly spacey and crushingly heavy. I ought to thank Ripple Music, an underground label that has gathered many promising downtuned bands, for the warm, analog High Priestess’s sound, and of course Mariana, who had the idea to form the band back in 2016, thus making a very special gift for our ears.

PS: The term “orgasmic” has a new meaning. Henceforth it refers to a concert co-headlined by Blood Ceremony and High Priestess (this goes for serious promoters only). Therefore, dictionaries should be adjusted accordingly.