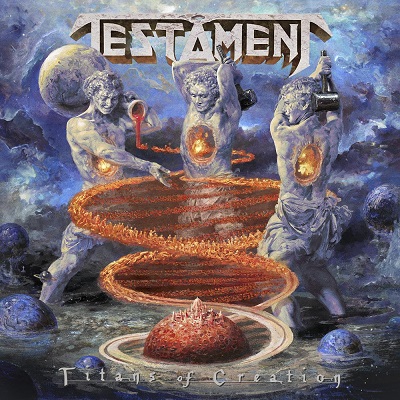 The Bay Area thrashers strike back. This time the album is called “Titans of Creation”, and it might not be considered the highlight of their career (after all, how could it be, when they have released such iconic and sound defining albums in the past), but has the trademark Testament DNA on its cells, on every tune, on every riff, growl, blast beat. Following the release of “The Gathering” (one of the best come back albums ever), all their albums have this fresh and modern thrash sound, which started in 1999 to shake the whole Thrash community and turn things upside down.

This is a band which has been heavily criticized by heavy metal fans throughout their career, however they have so seldom delivered a record which passes unnoticed. Their 13th album goes full throttle from the very first tune and Chuck Billy is on quite a form, for another album. This guy has unlimited resources and always manages to give every song his own dynamic and vibrant feeling. A feeling that has made “Chief” a so much recognizable and respectable personality in heavy metal. On drums, Gene Hoglan plays like there is not tomorrow and hits his drum kit with unprecedented force. Steve Di Giorgio complements his teammate making them a rock-solid duo that kicks ass on the rhythm section. “Night of the Witch” is a perfect example of that. These 2 guys could play anything, anytime, on any type of band and make it look so easy. This is a record where they fulfill this commitment so well.

Don’t get fooled for a second, this is an album which has its own melodic moments (check the intro of “City of Angels”, where the bass, the guitar and drums give such a great intro to the rest of the song), where also the “Chief” presents his clean/melodic vocals and proves one more time how good he is for the job. As for the duel of guitarists, they know each other for so long, and this album could be no exception on how well they handle the leads, the crunchy rhythm guitars and the melodic passages as well (“Ishtar’s Gate”, where the oriental passage creates a different perspective. Both Alex Skolnick and Eric Peterson need no introduction, and especially what they are capable of. I particularly love the groove on “Symptoms” which brings to me a little bit on my mind their album “Low” (a great record overall). And of course, Skolnick is so much into these melodic solos, he is so much enjoyable to listen.

“Titans of Creation” could be described in a few words, such as: Power, Precision, Melody, Groove and undisputed Attitude/Character. Listening to this album with headphones, we can appreciate and enjoy the groovy bass and massive drums, the melodic leads and solos and also this gifted growling metal voice that we all love. Enjoy!