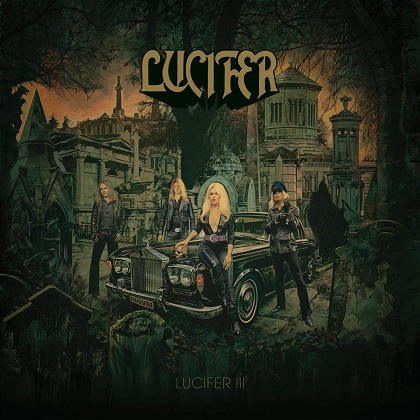 Lucifer is a band which is a unique case in the whole hard rock/heavy metal scene. To elaborate on that, I can say that, their music reminds and recaps from well known other bands (due of course to the influence of song writing from its own members), but this is not at all a negative statement. To the contrary, when you have such “all-star” teammates on a band who can write authentic and ‘one of a kind’ songs, this is something great and awesome to my humble opinion.

Lucifer started on a different basis and foundations, but with the same desire to write excellent and inspired music. The band started from Berlin, but is now based in Stockholm and this has proved to have brought a florescence on their music and has worked for their benefit. Nicke Andersson has completely revamped the band with his songwriting, ideas, playing and overall contribution, which has put Lucifer to another level. This is not an ‘occult rock’ band anymore just like that. But a band with potential to explore other territories, write new and fresh music and move forward.

The band takes things to the next level, where they have left it on their previous great “II” album. Johanna seduces the listener with her ecstatic, ‘manipulative’ and ‘vintage rock’ voice. She is the driving force of Lucifer and this is another record proving her charisma, inspiration and ability to ‘conquer’ the listener with her voice. The songs “Lucifer” and “Pacific Blues” are the perfect example exactly of that. 70s heavy rock is all over the album, and that is another factor which differentiates this album from the origins of the band, where Gaz Jennings (of Cathedral) played guitars. On “III” you can identify influences from Fleetwood Mac, Black Sabbath and Blue Oyster Cult. “Flanked by Snakes” has a very smooth flowing chorus, where lead guitars combined with backing vocals and vintage keyboards give the song a real charm. “Cemetery Eyes” is the perfect mellow ending to the “Third Commandment”, where Johanna’s vocals are simply amazing.

Lucifer’s “III” is a great, inspired record, a statement from the band itself, their best until the next one of course.

Brace yourselves and let Lucifer convincingly seduce you.