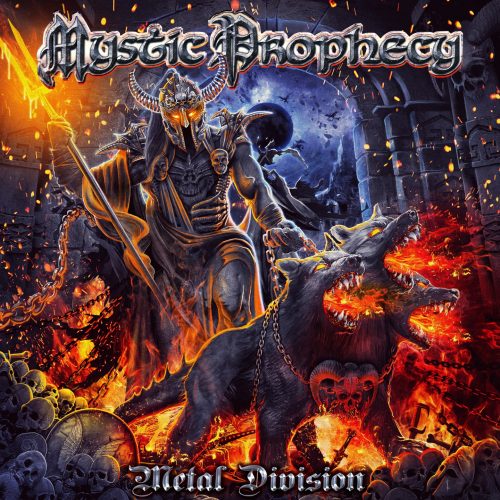 Mystic Prophecy is a well-known heavy metal act from Germany. Basically, it's R.D. Liapakis' band, who, apart from the vocals, the music and the lyrics, is responsible for the production of the band's albums. Mystic Prophecy has released a lot of good records and has progressed, since its debut. This time we have the band's new album, which is entitled "Metal Division", an album which has already received a great feedback from the press. In my case, I stood before an album, having read the amazing reviews of other journalists - my expectations were high!! After many listening sessions, I made my mind: it's a fine album, but not so good as they say. Yes, it contains many good songs (“Metal Division”, “Eye to Eye”, “Dracula” etc.), the production and the performances sound awesome, on the other hand, it's a full with cliché collection of songs. The bad thing for Mystic Prophecy is that everything that they are doing has already been done in the distant or the recent past.  Bands like Hammerfall, Dream Evil, Edguy, Firewind and Metalium have set the style, Mystic Prophecy follow up and the result is something well-done, but not fresh. Of course, someone may notice that Mystic Prophecy blends melodic power metal with speed and thrash metal elements (listen for example “Curse of the Slayer” and “Die with the Hammer”). Yet, that isn’t enough for the band to differ from the others. If you're a die-hard fan of melodic power metal, I may recommend this album to you.  Mystic Prophecy doesn’t reinvent its genre, this is a powerful album though.