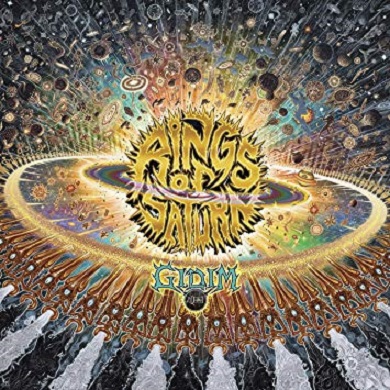 Rings of Saturn are an American deathcore band from Bay Area, California, formed in 2009, initially as a school band. During these ten years of activity, various line-up changes occurred, while Lucas Mann (guitars), the band’s mastermind and main composer, remains the only founding member.

They play a highly technical deathcore, being heavily influenced by sci-fi themes, like aliens, alien invasion and outer space (the band has dubbed their music as “aliencore”). Since their first album, it became apparent that their way of playing would be unique and they would follow a very peculiar path. However, their musical direction has caused controversy among fans. You see, here we have a perfect “love-them-or-hate-them” example.

To be honest, I never liked their first three albums, which were nothing more than an excessive demonstration of technical skills. Good ideas were buried into a chaos of riffing patterns and spacey sounds, where many things looked awkward and out of place. Hence, I always considered these albums as a tiring and frustrating experience. Besides, their production team always made their sound seem computerized; I bet that a teenage freak would produce that kind of music after countless hours of playing “Space Invaders”.

However, things changed in “Ultu Ulla” two years ago, their first effort via Nuclear Blast. This album signified a major step in their career, as they placed more emphasis on the melodic side of their music, while keeping under control their technical outbursts. In “Ultu Ulla” Rings of Saturn redefined themselves, balancing skillfully between two aspects, and maintaining the familiar elements that made them well-known. Even me, who had a strong dislike for their music until then, was thrilled by the album’s catchy, mesmerizing melodies, insightful technical patterns and eerie, carnival-like sounds. Hence, I was curious to find out if their new album, “Gidim”, would develop further this new pattern.

The first signs were promising, as the opening track, “Pustules”, is closer to the recipe of “Ultu Ulla”. Hellish, demolishing deathcore riffs and blast beats, enriched with Mann’s appealing melodic leads, form the well-known band’s spacey paranoia. However, I was disappointed upon hearing the whole album. Unluckily for my ears, Rings of Saturn returned to their previous orientation, preferring to show off again their technical skills. Highly complex –and sometimes awkward- patterns occur almost everywhere, making the listening experience rather tiring. What bothered me most, are the intermittent, staccato riffs and blast beats that occur regularly, an annoying feature that doesn’t allow the free flow of music and restricts our amusement. Notice how these parts degrade the quality of songs like “Hypodermis Glitch”, “Bloated and Stiff” and “Tormented Consciousness” and how compositions breathe more freely when they are absent (“The Husk”).

Furthermore, Mann’s solos are overused, being the dominant element of “Gidim”. Most tracks are overloaded with lead parts, making me wish that I stopped hearing the lead guitar, even for a while. My objection doesn’t regard the quality of lead patterns, since most of them indicate high levels of composing ability and skillfulness (specifically, listen carefully the melodies in “Pustules” and “The Husk”), but their undue use throughout the album. A more selective approach would be welcomed in this respect.

However, not all elements of “Gidim” are tiring or annoying. The band once again gives excellent samples of classic deathcore breakdowns: heavy, crushing and slow, they contribute to the album’s brutality. Also, some tranquil parts bring in mind the spacey feeling of the previous album (notice the majestic part towards the end of “The Husk”. I wish there were more of them!). As for Bearer, he proves that he is a decent singer for any band of the genre, interchanging constantly deep growls with screamo vocals.

Regarding production matters, the rather computerized approach is maintained. As in previous albums, sometimes you have the impression that the musical instruments are controlled automatically by a computer and not by humans. However, we have to live with that, since it’s the band’s decision.

Conclusively, I believe that Mann is really talented and skillful and collaborates with equally skillful musicians. These guys make Rings of Saturn’s expertise a rarity. However, in “Gidim” Mann wasted his talent, losing the balance he found two years ago. In “Ultu Ulla”, technical expertise was the mean to reach the ultimate goal; on the contrary, in “Gidim” it became an end in itself. The album will be worshipped be the band’s hardcore fans, who prefer the material prior to “Ultu Ulla”; as for the others, we’ll stick to “Ultu Ulla” exclusively.