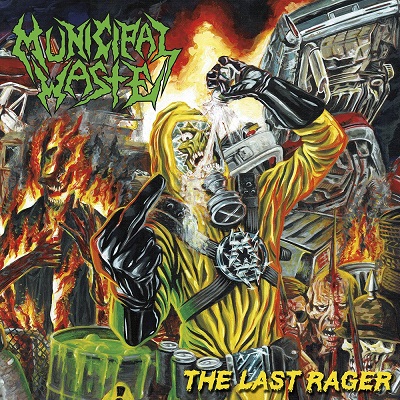 There are many bands who have dedicated themselves to the revival of the original thrash metal of the 80s, but few of them became really successful; Municipal Waste from Richmond are one of them (Violator from Brazil also come in mind). The Americans initiated their career being heavily influenced by the American punk / crossover genre and their first 3 albums indicated a balance between thrash and punk elements. However, later on the thrash aspect of their sound became more obvious, giving the impression (at least to my ears) that their intensity was somehow restricted, or controlled.

Anyway, what we must keep in mind regarding Municipal Waste is that they always had one and only intention: to offer amusement. This is what their music and a significant part of their lyrics define: thrash party, beers, laugh, open-hearted and humorous attitude towards everyone. This is what they still do in their new 4-track EP, two years after “Slime and Punishment”.

“The Last Rager”, during its 10 minutes (that is a long duration for a Municipal Waste EP!), gives what we are accustomed to. Brief doses of -either simple and straightforward or more technical- pure crossover thrash thrill our spine, in a release that the proper production shows off every instrument and highlights the fact that Municipal Waste is now a 5-piece band. Indeed, the addition of a second guitarist in 2016 (the Greek-originated Nick Poulos) has made their sound more technically precise, without losing its aggression.

The opening track, “Wave of Death”, proves that thrash can fulfill its purpose without unneeded complexities. Just a simple, strong, heavy riff is enough to raise adrenaline, supported by the even simpler Ryan’s and Phil’s gang vocals (“Wave-of-Death”). That is the only song that stays mid-tempo throughout its duration, since the other tracks start with a mid-paced riffage, before exploding to the usual Municipal Waste’s headbanging standards.

“Car Nivore (Streeet Meat)”, once it accelerates abruptly, remains intense and furious, despite a short, slower part. Tony Foresta’s performance was what drew my attention; he sounds more outraged, like he did in “Slime and Punishment”, and -above all- more punkish, an element that was almost neglected, especially in “Massive Aggressive” and “The Fatal Feast”. The whole collaboration between Tony and the gang choruses is indeed memorable and a trademark for the EP.

“Rum For Your Life” is a more rhythm-based composition, giving noteworthy amounts of heaviness, like the opening track, under a more groovy approach though. Regarding the closing track, “The Last Rager”, I wouldn’t mind if it was omitted from the EP; it’s not bad, but its less interesting riffs made me feel a little bored, no matter how many times I heard it.

Municipal Waste don’t add anything different to their music. They just try to return to the “Art of Partying” era, an effort that started in the previous album, and they succeed to some extent. We shouldn’t criticize them for lack of innovation or change, since they don’t care about innovating, or changing at all! “The Last Rager” might not be a memorable addition to their discography, but they sound like a tight band who has fun in the studio. In their case, this is what matters in the end.