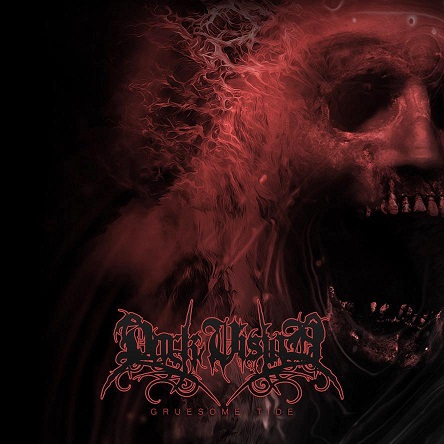 Greek death/black metallers Dark Vision aren't any newcomers. They were formed in 1995 and send the message that they are still alive, with this new single, which apart from the same titled new song, contains also a re-recorded version of the song "Dark Vision", a cover version of Bathory's "Raise the Dead" and a rehearsal version of another new song, "Of Unknown Artist" . "Gruesome Tide" is a hell of an extreme metal song, which balances on the ledge between death and black metal, having a srong Scandinavian sound style. The sharp guitar riffs cut as a knife and the blackened atmosphere swallows the listener, who instantly finds himself engulfed in flames. Dark Vision shows that the band has taken the right path, which may lead them to a successful future. If the new album sounds that way, we will be talking about something impressive. This positive impression comes also as a result, after listening the reworked version of the "Dark Vision" song. The comparison of the old and the new version will persuade the listener that the new line-up has given a new, much-inspired dimension to the song, making this tune a classic black metal opus. Of course, the band's cover of "Raise the Dead" is a respectful one, but shows the charisma Dark Vision has, too. Even the last song of this release, the rehearsal take of "Of Unkown Artist", stands as a teaser for the band's upcoming album. So, you extreme metal fans don't hesitate to taste this new single. "Gruesome Tide" is a nice example of hellenic death/black metal!