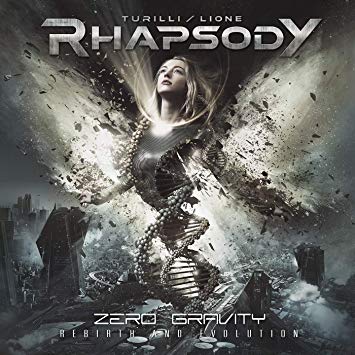 Luca Turilli, one of the most important Italian guitar players and songwriters of his age, and Fabio Lione, one of the greatest singers in heavy metal scene, created a new band under the innovative name Turilli/Lione Rhapsody. The lineup also includes former Rhapsody of Fire members, bassist Patrice Guers, the one and only  Alex Holzwarth on the drums and guitarist Dominique Leurquin. My humble opinion is that perhaps it would be the best time for them to wean themselves off the name Rhapsody. It is a shame that Turilli and Lione are compared to something that belongs to the past - they are so recognizable musically that they no longer need the name Rhapsody to promote them. I was really excited with their debut album “Zero Gravity (Rebirth & Evolution)”, they sound so fresh with some new ideas but they don't go away from the familiar paths they have established over the years. With his previous band, Luca Turilli tried to move in a different direction from the classic Rhapsody sound, with keyboards and orchestras certainly dominating most of the tracks. Here he balances the musical instruments and almost succeeds - the keyboards are slightly superior to the guitars, but this does not sound annoying. The small touches of folk music give the album a nice aesthetic. Moreover, you will find amazing performances from Lione once again – he sounds in an excellent condition, with his powerful, soaring vocals being as strong as ever, while his softer dramatic vocals are once impressive – I don’t know if I am exaggerating, but he is one of my favorite singers. The production of the disc from Fabio and Luca is perfect and sounds so loud and clear, which is to be expected because of their long experience. The recordings, the mixing and mastering were done in Simone Mularoni’s Domination studio in San Marino. The impressive cover was created by famous artist Stefan Heilemann. I think it is a great choice to use female vocals once again, with the presence of Elize Ryd (Amaranthe) as a highlight. Remarkable is the participation of several great musicians at various tracks on the album, such as the great Sascha Paeth, Emilie Ragni, Joost van den Broek and more.