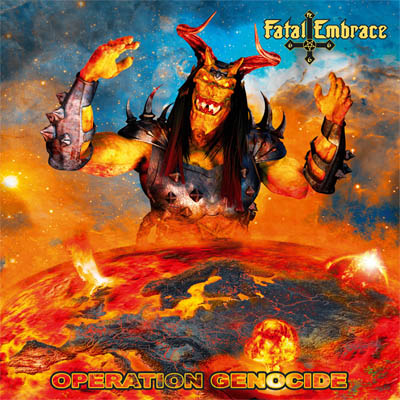 Fatal Embrace isn’t a newcomer band. They were formed in 1994 and “Operation Genocide” is their sixth studio album. With this new album the German thrashers prove that they are still a force in the thrash metal genre. Influenced by bands like Slayer and Sodom, Fatal Embrace offer us a collection of storming, crushing, awe-inspiring new songs, which will satisfy every thrash metal fan. Their songs are based on vigorous guitar riffs and catchy vocal lines, their performance is impressive and “Operation Genocide” is a thrash metal tour de force. Give it a try and you will be astonished with songs like “Betray Your Heroes”, “Skinned to be Alive”, “Critical Scum” and “Spawn of Plagues”. You won’t find a filler, just pure emphatic thrash metal hymns, which will make you bang your head! The Germans have the experience, the spark and the inspiration, which distinguish them from the others. Let’s hope that with this new album Fatal Embrace will manage to establish themselves as a fine act of extreme metal. Skinned to be alive!