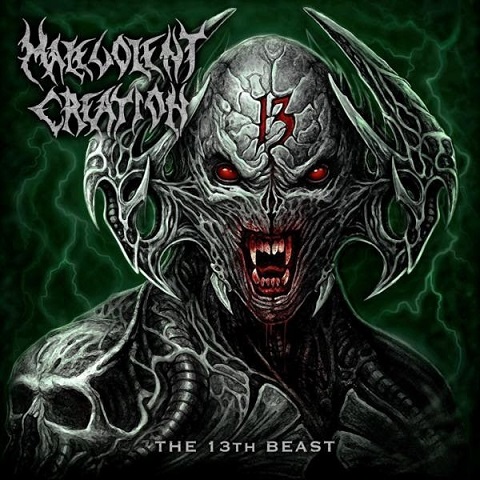 Sadly, sometimes misfortune happens to favorite bands. When Bret Hoffmann, one of the most iconic frontmen of the American death metal scene, passed away tragically one year ago, almost everybody assumed that this grievous occurrence would be the end of the legendary Malevolent Creation as well, given that Hoffmann and Fasciana were friends since their adolescence. However, instead of ending the band permanently, Fasciana decided to form a completely new line-up, hiring Lee Wollenschlaeger (vocals and guitars), Josh Gibbs (bass) and Philip Cancilla (drums). Probably, Phil’s purpose was to find a way out of his sadness through music creation, something we have to respect. A few months ago, the new Malevolent Creation released their 13th album via Century Media, entitled “The 13th Beast”.

The true nature of the new record is easily implied by its title: the band created an uncontrolled, outraged beast that spits genuine, American death metal of superior standards. The very essence of Malevolent Creation’s temperament that we are all familiar with during all these years is one more time present: mostly up-tempo songs reveal instantly their anger, brutality and unwillingness to compromise with a softer, more dull sound. Tracks like “End the Torture”, “Mandatory Butchery”, “Canvas of Flesh”, “Decimated” and “Trapped Inside” define at full extent what the band does in this album; that is unleashing hell. Aggression permeates the album, while the thrash orientation of certain songs is clear; that is a trademark, commonly found in most of the band’s records (sometimes I think that they were always better Slayer than Slayer themselves).

The duel of Fasciana and Wollenschlaeger unleash cutthroat riffs everywhere, with the exception of some “peaceful” parts. Song structures are mainly simple and straightforward, but I do not consider this as a minus, since riffs are well-crafted, addictive and memorable, accompanied by appealing refrains and lyrics that transmit vividly feelings of rage and frustration. Guitar patterns, either chaotic and cataclysmic or rhythmic and heavily crushing are properly highlighted by the production team, remaining at the foreground.

Guitar work would not function at all if it wasn’t supported properly by the rhythm section. Cancilla fulfills every expectation we have behind the kit with his robust, precise blast beating (please adore his patterns in “End the Torture” and “Born of Pain”) and perfect collaboration with Gibbs, whose bass lines become the protagonist in some rhythmic parts, being really thunderous and heavy. As for Wollenschlaeger, he replaces Bret decently, succeeding with his dynamic performance and tone of growls in upgrading the quality of “The 13th Beast”. Overall, the band members perform like they have been playing together for years; and usually this is not easily achievable for a new line-up.

Phil’s composing ability remains at high standards, even after many years of discography. However, he really excels at two distinguishable songs, that I personally include them in a list of the best compositions of recent years. “Born of Pain” feature the usual hellish tempo of the band, enriched with astonishing, slower parts where crushing, cement-like riffs and the torturous refrain, intensified by Lee’s desperation, make us want to scream (“Born of pain, we will die as one, everlasting hate…”). The slow guitar and bass patterns towards the middle and the end of the song put a heavy weight on our shoulders that I am not so sure we want to get rid of.

As for “Release the Soul”, the doom, compulsive intro, originating seemingly from “Dead Man’s Path” four years ago, proves that Malevolent Creation can be as slow and sadistically torturous they want. Incredible mid-tempo rhythm and riffing follow, leaving behind the aggression of previous tracks. The initial, slow pattern returns to end the album optimally and triumphantly, making us wonder what we just heard.

Honestly, during the first listening sessions of “The 13th Beast”, I had the impression that “Dead Man’s Path”, an album that I respect a lot, was superior, due to its inclination for various tempo changes, while the new record provides a more straightforward, “in-your-face” death metal, without unnecessary mannerisms. In that sense, you may find the new album as repetitive, due to the rather fast tempo of most songs; however, you should be patient and not reach to early conclusions. As weeks pass, I gradually change my mind, considering “The 13th Beast” even marginally better than “Dead Man’s Path”. Above all, it occurred after a tragedy and regardless of its musical value, it constitutes a triumph of creation against bad lack. Personally, I am satisfied that Malevolent Creation are still among us.