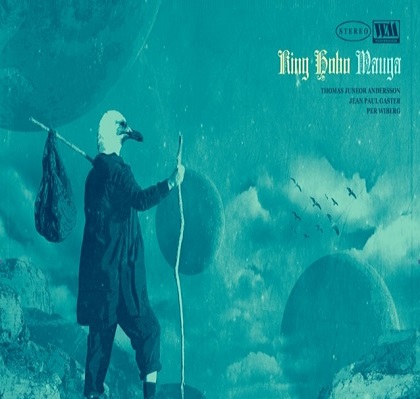 One of the most underrated music projects/bands, King Hobo just released their second album “Mauga”. This project consists of members from Clutch (drummer Jean-Paul Gaster) and Kamchatka (Per Wiberg and Thomas Andersson) and shows the constant desire of these people to create new music, evolve and be active on a constant basis.

Like the first self-titled record, “Mauga” really feels like the band is constantly jamming and actually I was wondering if we were ever able to see these guys live, playing their music. I am pretty sure they would seriously kick ass, particularly through their natural way of playing altogether and jamming. This is an on-stage dream, but for the moment, let’s stick to “Mauga”.

This album is the perfect mingle of three masterminds, each one on his own terms and ground. Jean-Paul is a fantastic drummer, with a long career behind the Clutch drumkit, and this is another record where he proves his reputation of a groove machine - he is so much fun to listen to. A funky, bluesy and gloomy tone is set from Thomas Andersson playing guitar and singing on his trademark vocals. This guy plays the guitar on a sensational way, reminding us why Kamchatka is also an underrated band within the Swedish hard rock scene. Per Wiberg is phenomenal for another time, either playing his keyboards like no other, contributing to vocals on a few songs or being the low rumble power keeping the groove high with his Fender bass. There are interesting and catchy moments on every corner of this record, keeping the momentum on high standards all the way from the start until the end. It is more than obvious that the songwriting has been natural, organic and easily flowing on all songs. Pure delight!

This is a power trio which will make you wanna listen to this record (and also the first one) again and again, adding more beer to your glass or putting on more mojitos, for the ones who are at the beach enjoying the sunset and a refreshing dive at the ocean. “Mauga” consists of some cool, groovy and funky tunes with no musical boundaries and full of inspiration and positive mood. This is an exceptional record. Let yourselves into it. You’ll get rewarded.