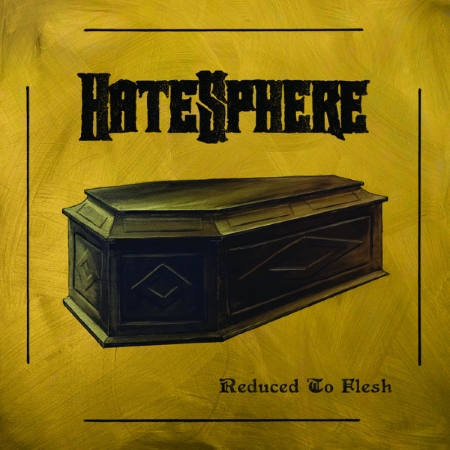 When Hatesphere started their career back in 2001, they introduced themselves as one of the countless At The Gates’ clones, being blatantly influenced by the Swedish melodeath scene. Soon, they changed their orientation to embed their preference for thrash metal, through a grooving/core approach, remaining at this path until today. Recently, the band from Aarhus, Denmark, released their 10th full-length, returning to Scarlet Records, the label that had collaborated with in their first three albums.

“Reduced to Flesh” is all that we wait to hear from a quintet like Hatesphere: aggressive, modern, up-tempo thrash, with strong groovy patterns, solid, thunderous rhythm section and vocals that spit hate. The mixture of elements that constitute the very essence of Hatesphere’s attitude are once again present, having no other intention than to send you directly to the pit.

Despite the overall high-speed aggression of the album, you will find exceptions that deviate from the hateful path; melody patterns in “Corpse of Mankind” and “Can of Worms”, the breakdown with ambient sounds in the middle of the title track, the presence of keyboards in “Lethal Mistakes” and “Afterlife”, reveal Peter Hansen’s tendency (songwriter, guitarist and only remaining founding member) for some experimentation. However, fans who crave for moshing, should not feel disappointed at all; as I mentioned, these additions are exceptions only.

Esse’s vocals are definitely what such an album needs; being core-oriented (some death growls occur only in “Corpse of Mankind” and “Afterlife”), they remain furious, intense, hoarse and not particularly high-pitched throughout the 43 minutes that “Reduced to Flesh” lasts, uplifting every listeners’ senses. Strong rhythmic support from drums, including appropriate blast-beating at times, complements the formula.

However, the main weakness of the album (a feature that –unfortunately- is evident in most Hatesphere’s albums) is lack of creativity. Most songs do not differ substantially from each other, offering the typical, American-rooted core riffing that we come across in many other bands. Listening to the whole record becomes rather boring, especially after the middle, since new ideas do not thrive at all. You can hear occasionally two or three tracks that you have a preference for (personally, I liked the dynamism of “Can of Worms”), but you cannot find something more worth mentioning.

Literally, we have already heard this kind of stuff throughout all these years, either in Hatesphere’s long discography or by other bands of a rather over-saturated genre. “Reduced to Flesh”, in essence, does not add something different to the band’s musical direction (anyway, I don’t think that they intend to expand their musical vision and that’s their undeniable right). Overall, it is good since it fulfills its mission (that is: moshing) and will be more appreciated by the bands’ fans. As for the others, they may pass on, looking for innovations elsewhere.