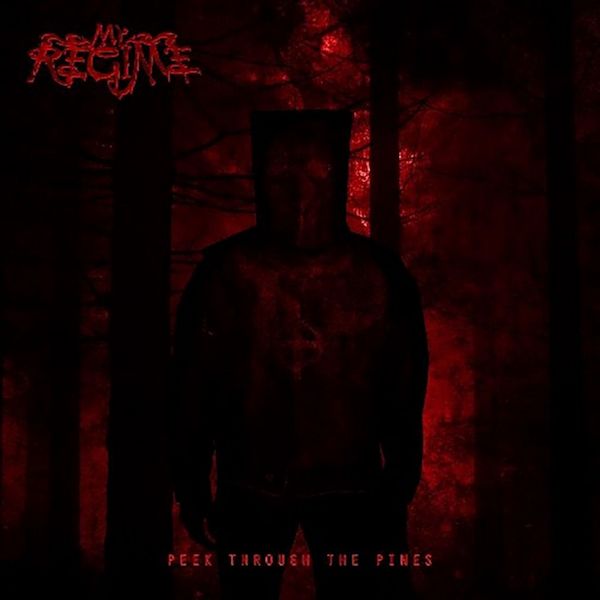 Following the first two releases of the band, Spice is ready to unleash again a thrash record which sounds mightier than it actually is. “Peek Through the Pines” has a very controversial album cover, however, on the other hand, the band seems not to bargain at all when it comes to raw and straightforward riffs which make you headbang all along the record. No compromise. No second thoughts.

My Regime’s lineup is composed (apart from Spice) from Kryddan’s old fellas, Ruben Hansson (Mushroom River Band, Kayser, Band of Spice), Swaney (Kayser) and Alexander Sekulowski (Mushroom River Band). The album deals with the brutal serial killer, “killer with the hood”, named “The Zodiac killer” or simply “The Zodiac”. A serial killer who acted at the end of the 60s/beginning of the 70s in California, having brutally murdered several victims and who actually sent a postcard to the newspaper ‘Chronicle’ on March 22nd, 1971 claiming responsibility for the disappearance of one of his victims. On that postcard, he “featured a scene from an advertisement for Forest Pines condominiums and the text "Sierra Club", "Sought Victim 12",[60] "peek through the pines", "pass Lake Tahoe areas", and "around in the snow". Zodiac's cross circle symbol was in both the place of the usual return address and the lower right section of the front face of the postcard.” That is how the album was named after the Pines, and also where the controversial album cover got inspiration from.

Music-wise, Spice delivers the song with his characteristic angry and growling voice, reminding us how good he is, not only on heavy rock duties, but also on the extreme metal genre, where his past will always want him to revisit and draw inspiration from. Guitar Riffs flow in a continuous and groovy tempo, leaving no doubt and have this, ‘in-your-face’, attitude. Perfectly fitting the whole concept. Drumming is also massive and along with the bass they constitute an unbeatable rhythm section which leaves nothing behind. Like always, Spice has some quite interesting elements on this record as well: there are 2 songs, (“You will never Understand” and “Unglue My Soul”, 7:27’ and 8:40’ long), which both begin quite ‘sneaky’, having mid-tempo and melodic parts, adding to the variety of sounds, influences and aesthetic of this record. I kind of remembered there the song ‘Absence’ from Kayser’s second record “Frame the World… Hang it on the Wall”, especially on the mid-section part, where the song slows down, becomes melodic and then it rises up again with frenetic riffing. Genius!

“Peek through the Pines” has a lot of old-school thrash influences, a straightforward structure and a groovy essence, elements of the Spices’ career span. Headbanging is allowed, actually, it is mandatory. The atmosphere is frantic, Riffs are galloping, Spice is madly growling behind the mic. His Demons are there, He’s fighting, however, his need to create music will prevail at the end.