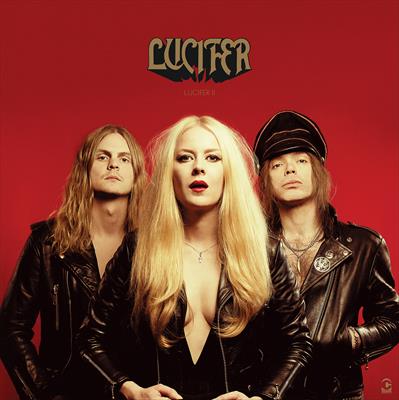 Lucifer came back full throttle, with their second album, ready to conquer what is to be conquered. However, this time they are serious, and they give us a solid, well structured second album which grooves a lot and, despite the short-lived “Oath” (where Johanna Sadonis - now Andersson – played), Lucifer make a robust statement with the “Second Coming”.

This is definitely a record marked by Nicke Andersson. In so many ways. From the very beginning of “California Son” you get the feeling that this song has the trademark elements of Nicke’s career, especially from The Hellacopters, the ISE, etc. The groove, the sound, the song pathway, the guitar lead parts, the rhythm guitar part is Nicke all the way. During this summer Nicke and Johanna got married in Stockholm, making ‘official’ a relationship for quite a while now. However, it was known for a while now that Nicke has been a permanent member of Lucifer, and on his ‘natural’ instrument role, behind the drum kit. Well, on the “Lucifer II” album, apart from writing songs and playing drums and bass, he has also contributed a lot of guitar parts, leaving his undeniable mark. Saturn’s guitarist Robin Tinderbrink contributes perfectly on the trio’s sound, which is so compact and well played, sounds like a 5 piece instead. The band shows a confidence second to none, and that is mainly because Johanna came back to the forefront, revitalized, energized and on high energy vibes. The album has a lot of different influences, from Black Sabbath, Blue Öyster Cult, Deep Purple, KISS and of course there are some rhythm sections where the riffs resemble mid-tempo songs of Entombed, as far as the groove is represented. The songs are catchy, the voice of Johanna is capturing and seductive, and the ‘evil’ element is spread out.